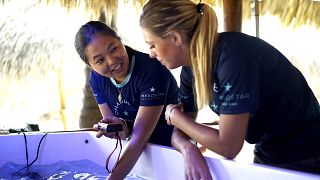 Coral bleaching has been big news recently. After far too long as an obscure environmental phenomenon, the story of how rising sea temperatures are ruining this vital marine ecosystem is finally holding our attention.

Not without good reason. The Great Barrier Reef in Australia has suffered three mass bleaching events in the last five years, one took place just six months ago. Since 1998, around 345,400 square-kilometres of World Heritage listed coral networks have been destroyed.

But the Caribbean is facing a different problem.

Since the 1980s, disease has been wiping out coral species in the region. Six years ago one, in particular, Stony Coral Tissue Loss Disease (SCTLD) became a pandemic. It spread down the coast of Florida to the Caribbean, wreaking havoc on dive sites that are important to coastal health and to tourism.

At the time marine biologist, Dr Megan Morikawa was working in the Dominican Republic. She was building a coral lab facility at an Iberostar Group resort - not the first place you might expect to find a world-leading facility.

"All of a sudden, we ended up with the only closed system in the country that could house coral when the first parts of the disease were sighted."

The coral disease hadn’t yet been seen in the country, but they were hoping to be able to help protect the species from being lost elsewhere. Suddenly, eight months before they predicted it would become a problem, SCTLD appeared.

“All of a sudden, we ended up with the only closed system in the country that could house coral when the first parts of the disease were sighted,” she says.

Most marine labs use water from the ocean as salt water ecosystems can be hard to replicate, but - coincidentally - Morikawa’s facility was closed circuit. Water was filtered through kilometres of sand before it came into the lab.

“It felt like we were building the Noah's Ark that we didn't know that we needed, until all of a sudden we drastically needed it.”

Scaling small, successful experiments up to the point where they are able to have a big impact on global coral health has always been a problem for marine scientists.

As the Global Sustainability Director for Iberostar, Morikawa believes that the only way to stop 90 per cent of coral reefs from being lost by 2050 is to get everyone involved - including those in the tourism sector.

“Of course, a business mentality really helps you to say, alright, well, what's the viable solution for you to be able to implement at scale,” she explains.

Businesses, like hotels and resorts, have the expertise to build the facilities that scientists like Dr Morikawa need and the knowledge of local environmental regulations. Without Iberostar, she says she likely would have had to spend years looking for grants to hire staff before even beginning to build the lab itself.

“In a year, we had a coral lab built within the hotel itself, that serves not only as an incredible outreach centre for clients and employees, many of which to see coral for the first time in their lives, but also a lab facility where we were actually doing some of the work that I started in my PhD.”

It’s about bridging these gaps between companies, who have the infrastructure expertise, and scientists, who bring the evidence based approaches to Iberostar’s sustainability drive.

Now Ibersostar’s initiative, Wave of Change, is opening two more coral nurseries at resorts in Mexico and has launched four scholarships for researchers who are helping coral reefs to fight climate change.

The importance of education

It’s not just coastal health where the hospitality industry can make a difference. This is why Wave of Change is taking a holistic look at the impact hotels and resorts have on marine environments, considering other ways these companies can support sustainable tourism.

By the end of this year, Iberostar aims to have removed all single use and problematic plastics from its operations. The company has also changed up menus to reflect sustainable fishing practices, respecting seasonal changes and using seafood found local to the areas their hotels and resorts are located in.

Tying all three of these pillars together is an approach that teaches guests, staff and local communities why coastal health is so important.

“Education for us has so many layers, and many more layers than I expected when I first joined the company,” Morikawa says. “If you don't know about these ecosystems, then how can you possibly build a connection to them?”

"Any of these solutions must fit into the local context and the local needs of the community. This has also been a really major component."

People who work at these hotels are trained to be ambassadors for their local environment. Everyone from the housekeeping staff to employees in restaurants and bars is given the opportunity to find out why Wave of Change is important. That, in turn, feeds through, to guests.

Working with local NGOs they are taking this education to local people and learning from them in return too. “Any of these solutions must fit into the local context and the local needs of the community. This has also been a really major component,” she explains.

Tourism offers the potential to provide employment for people while meeting sustainable development goals. Morikawa points out that our desire to visit coral reefs or experience the natural world has been proven to help protect vulnerable ecosystems by making them worth more intact.

“These are some of the only instances where animals are more valuable alive than they are as resources.”