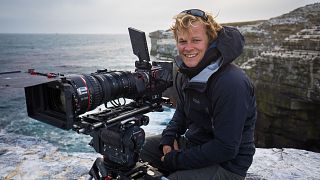 “We sailed in a 50 foot sailboat for 800 miles to the island of South Georgia, which is a sub Antarctic Island, right at the bottom of the South Atlantic Ocean. It is covered in millions of penguins and seals.”

Bertie Gregory tells me the wild story of his journey to South Georgia with a surprisingly casual laugh.

“But, during the journey, it took us about a week to sail there and three days in we were just in this friggin’ crazy storm. I remember us sat in the wheelhouse, opposite each other, trying not to be sick. We just had this amazing moment of like, ‘how on earth did we get into this? This was a terrible idea!”

This incredible experience is, after all, just one day in the work life of the BBC and National Geographic wildlife filmmaker.

At just 26 he is one of the most sought-after camera people in the business. He has just won a BAFTA and is currently a contender for an Emmy for his work on the critically acclaimed Seven Worlds, One Planet series.

“Most of the time you turn up to the airport, having never met the other three people you're going to spend all day every day for the next two months with,” he tells me, “and you'll experience something with them that maybe no one else on the planet has ever seen before.”

How do you become a wildlife photographer?

The business of making nature documentaries has slowed down a bit for the moment, at least for Gregory. With the COVID-19 pandemic preventing him from travelling abroad, he has been taking some time to get back to the root of what led him to love wildlife in the first place. “I've just started to get back in the water now that you can dive again.

“I grew up doing a lot of surfing and things like that off the Cornish coast. I think just when you spend that amount of time outdoors, you sort of gain an appreciation for wildlife.” he explains, speaking to me over the phone during a rare extended stay in the south west of England where he grew up. “It’s really easy to look back on things and say- ‘Oh that was the moment when that happened.’ But yeah, looking back I think that was the reason I was so interested in wildlife.”

It wasn’t always as glamorous as awards shows and press interviews, though. “It’s something that I think isn’t necessarily very cool, being into wildlife, when you’re a teenager,” he admits. “I hope that is changing, but taking pictures was a way of connecting with my friends who didn’t really care about wildlife.”

“It was also a really good way of explaining where I’d been because everyone thought I was a complete weirdo.”

This passion for wildlife at a young age and talent for photography led him to get a job making films for National Geographic straight after graduating from university. Now Gregory has his own series with the broadcasting company and has worked on films for the world-famous Natural History Unit at the BBC.

“Part of the reason I’m interested in wildlife is because I grew up watching David Attenborough documentaries and said ‘Oh that’s what I want to do one day’. Everyone of course said ‘No, that's a rubbish idea, no one actually does that’.

“So yeah, to now actually be doing that is really special.”

He tells me that this legacy is always on his mind when he is filming for the BBC. Often David Attenborough’s voice is playing in his head as he imagines how he will narrate the piece. “I think there’s definitely like a prestige that you have with you when you’re filming it,” he says “it does make the projects extra special to know that.”

Are nature documentaries good for conservation?

Alongside the adventure and daily close encounters with rare wildlife, Gregory says he feels an immense sense of moral responsibility when filming to help protect the natural world.

“We don’t live in a world where everything is pristine and lovely, which is really how wildlife documentaries have been made for the last 50 years,” he says. “I think gone are the days where you can make a wildlife film, and pretend everything's fine.

“I can't really think of a place that I've been to where there hasn't been a problem that the animal or place that you're filming faces,” Gregory reveals. “Even the most remote places are still affected by people.”

This daily exposure to conservation issues had left him feeling as though he has a duty to get people excited about wild places. He wants his films to show people the impact of human actions with the hope that it might help change people’s behaviours.

“Certainly in the last few years, you have started to see programmes like Blue Planet II, which were pivotal in pointing out the issues and making that the story. What makes all these wildlife stories much more engaging is that this is immediate, and this might be the last time you get to see that [animal].”

It has to strike a balance though, he tells me, between becoming an “enviro-rant” and completely glossing over the conservation. “Without that balance you’re really preaching to the choir. The people that are going to be interested enough to watch that are already on your side.

“Ultimately, we’re making entertainment and it’s got to be primarily entertaining. Otherwise, why wouldn’t they just go and watch another Marvel movie or whatever, you know?”

Gregory also says that while this “passive conservation”, where you make a film about something, show people the problem and maybe inform them of a solution is one way of engaging with the problem, it isn’t the only way.

Taking an active role in conservation

Over the last few years, the filmmaker has been making an effort to become more than just a bystander in the conservation effort. “I guess what I'm trying to also do now is how do we go one step further and actually quantify the positive change,” he explains.

Gregory recently travelled to Vancouver Island, British Columbia for National Geographic. He was filming with a project run by the Rain Coast Foundation which was buying grizzly bear trophy hunting licenses and using them to take photos instead of killing the animals at the end of the hunt.

The photos Gregory took on the trip were sold off at auction to raise money to buy more of these licenses and prevent further hunts from going ahead. “It's really nice because it is sort of beating them at their own game, you're playing by their rules,” he says, adding that trophy hunting is now banned in British Columbia.

Making this change from passive communication of conservation to getting actively involved is something he is hoping to do more of in the future by engaging the local communities affected by these kinds of problems.

“Particularly I think, sort of old school science and filmmakers are guilty of that, like, you know, parachute in colonial style and forget about the local people,” he says. “I think that's been that sort of style of filmmaking has been something that our industry has been pretty guilty of.

“Now there is more of a stress I mean, often we have amazing local guides, but it is I guess, how do we go one step further to enable them to tell their own story.”

And does this engagement with people local to these areas help with the conservation effort? Gregory definitely thinks so. “Really, the change needs to come from the local people. That's the only way of making it sustainable and making sure that they win from it as well.”