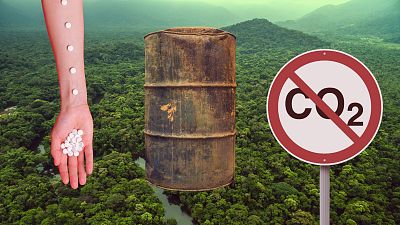 After widespread fires in Brazil and Bolivia, the Amazon Rainforest was the focus of many news reports at the end of 2019. From politicians to the media, the acres of burning forest were soon dubbed the ‘lungs of the world’ as concern grew over what the effects would be on air pollution and the impact of losing this diverse environment.

The area is home to millions of Indigenous peoples from up to 500 tribes. Through the exploitation of resources and environmental damage, the places where they have lived in harmony with the rainforest for thousands of years are at risk of disappearing. When they disappear, Indigenous peoples are forced to move to unfamiliar places losing their culture to colonisation in the process.

There are 40,000 different plant species known to exist in the Amazon and 75 per cent of these can only be found in the Amazon. Many of these plants are essential to Indigenous communities and, although we may not realise it, the health of the planet as a whole.

With a wealth of different species and hundreds of years of local knowledge of their medicinal properties, the plants of the Amazon have great potential as a source for future medical advances. It is one of the world’s most biodiverse regions with thousands of species still unrecorded.

Treatments for malaria, Parkinson’s disease and leukaemia in modern medicine all come from plants found in the Amazon. Around a quarter of all drugs used are derived from rainforest plants - with less than five per cent of species explored by Western science for their healing potential.

There is, however, a history of exploitation of resources from the Amazon, where Indigenous populations are not compensated or considered when they are extracted. Given the wealth of medical knowledge held by people who rely on this land for survival, it is important to work with local communities to make sure that money made by successful drugs is channelled back into conservation.

After decades of extraction, spills have left parts of the forest in northern Ecuador contaminated with oil. This oil contamination has even been called the ‘Chernoybl of the Amazon’, as it affects local fresh water sources, ecosystems and human health.

Now farmers in the region are learning how to use native plants to clean up the soil. Local bacteria and fungi have already been found to break down crude oil by using it as a food source. Scientists from Ecuador’s Amazon State University have been looking at organisms that naturally survive in the polluted areas, as they are most likely to be able to break down the oil and redistribute its components back into the ecosystem.

Local educators from Amisacho's  Restauración project are applying the same theories to develop a library of native plant species that could help with the clean up process. By providing courses for nearby farmers using both modern and ancient techniques, the group hope to be able to find a way of sustainably cultivating an ecosystem of bacteria, fungi and plants that can repair the damage done by the oil industry.

The claim that the Amazon Rainforest represents the ‘lungs of the world’ may be misleading, but the role of the region in regulating CO2 emissions is something experts agree is important.

“The rainforest absorbs about 15% of the carbon dioxide in the atmosphere,” Jérôme Chave, a researcher at the Biodiversity Evolution Laboratory in Toulouse, told Euronews last year. “This is really fundamental because if it didn’t exist, this carbon dioxide would remain in the atmosphere and climate would change at a fast pace.”

Deforestation, fires, and climate change mean that this carbon absorbing capacity of the forest is quickly disappearing. Average temperatures in the Amazon have risen by up to 1.5°C over the last 100 years with three severe droughts since 2005. Changing temperatures and rainfall are causing trees to die meaning the amount of carbon they absorb has been falling year on year since the 1990s.

The Amazon has shrunk by 15 per cent since the 1970s and by 2030 scientists say that it will not be able to help offset rising carbon emissions.

Risks faced by the amazon

In an address to the United Nations at the time of the wildfires, Brazilian President Jair Bolsanaro claimed that international leaders “fell in love with the press’s lies” and “behaved disrespectfully with a colonialist spirit” when criticising his decision to relax environmental protections. It is a position he and the Brazilian government have doubled down on in recent months, using the global crisis as an opportunity to make exploiting Amazon’s resources easier.

Brazil's environment minister, Ricardo Salles, suggested earlier this year that the government relax regulations intended to protect the Amazon - while the press was distracted by the COVID-19 pandemic. As you might expect, this sparked concerns that continued easing of already lax environmental rules could mean 2020’s fire season is even worse leading to the loss of even more rainforest.

This comes at a time when preserving our natural resources is more important than ever. Ahead of the UN Biodiversity summit in September, representatives from WWF, the UN and WHO issued a stark warning about what this rolling back of protections could mean for our future.

In a piece for the Guardian, Maria Neira, Marco Lambertini, and Elizabeth Maruma Mrema said: “From the Greater Mekong to the Amazon and Madagascar, alarming reports have emerged of increased poaching, illegal logging and forest fires, while many countries are engaging in hasty environmental rollbacks and cuts in funding for conservation.”

Bringing back what’s been lost

Not all of the eight countries the Amazon spans are critical of efforts to protect its natural wealth. Colombia is a highly biodiverse country- home to nearly 10 per cent of the planet’s animal and plant species- and has been a leading voice in South America on environmental issues.

Earlier this year COP26 President, Alok Sharma pledged £64m (€71) of support to bolster Colombia’s efforts to protect the Amazon. He said that “we all have a duty to work together to protect our planet’s precious biodiversity”. According to Colombia’s Minister for the Environment, Ricardo Lozano, the money will be used to “focus on supporting the fight against deforestation and environmental crime, as well as the creation of sustainable economic livelihoods.”

Some have interpreted it as a warning to the Brazilian leader that if the country doesn’t change its approach to environmental protections, it will miss out on international aid packages like this one.