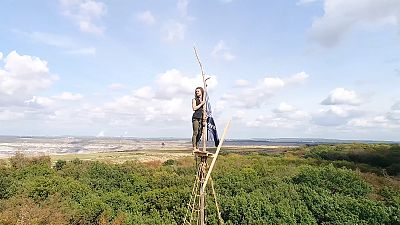 The activists occupy ancient forests to stop coal mining companies from cutting down the trees.   -   Copyright  Finite: The Climate of Change
By Rosie Frost  •  Updated: 16/07/2020

Filmmakers have spent several years living alongside protestors fighting the construction of new coal mines in Germany and the UK.

The community of secretive activists have been risking their lives since 2012, living in treehouses and tents in the forest they are trying to protect.

Using the footage they gathered, Rich Felgate and Ryan Keane have created an immersive feature-length documentary about the “David and Goliath battle” between open-face coal mining companies and environmental activists.

“When I tell people that there’s a 500m deep coal mine in Germany where a majestic ancient forest and several villages once stood, people scarcely believe it,” says co-director Rich Felgate. Less than 10 per cent of the forest now remains, according to the environmentalists featured in the film.

Now the makers of Finite: The Climate of Change, have launched a crowdfunding campaign to help finish the documentary and get the activists’ stories in the public eye.

Despite the majority of European countries looking to move away from coal entirely, Germany was until recently still expanding its use of this fossil fuel. Electricity provider, RWE’s network of power stations has historically been one of the biggest sources of CO2 emissions in Europe.

Filming for Finite saw Rich Felgate integrate himself into a group campaigning against the destruction of the ancient Hambach Forest in Germany by RWE. They were trying to prevent the energy producer from obliterating the 12,000 year old forest as it expanded Europe’s largest coal mine.

For more than a year Felgate lived alongside activists as escalating numbers of protests eventually led RWE to pause its deforestation operation.

An unlikely alliance with British campaigners

When another area of natural beauty was threatened by similar coal mining plans in Pont Valley in the northeast of England, campaigners formed an unlikely alliance with the Hambauch protesters. The team were there to document this parallel fight which recently made headlines as a historic victory was won by activists when the local government rejected plans for the proposed mine.

June Davison, one of the Pont Valley campaigners featured in the documentary, explains that she hopes the story can inspire people to stand up against power and stop needless environmental destruction. “We lost so much in our campaign against opencast mining, but we also gained so much. We showed what communities can achieve when we work together and fight back.”

The documentary’s creators say that their film puts forth compelling evidence that the company behind the British coal mining plans, Bank Group, acted unlawfully in their destruction of the Great Crested Newt’s protected habitat.

On a ‘shoestring’ budget

“We’ve done a lot on a shoestring budget with no frills,” says Felgate. “I lived in tents and treehouses in protest camps for over a year whilst filming and depended on the generosity of people welcoming me into their homes to charge camera batteries and warm up with a cup of tea.”

He hopes that this “do-it-together” attitude he experienced will encourage solidarity from the climate movement to help them to finish the film. Felgate believes that creating Finite has been a form of direct action as it covers the stories of resistance at a level of depth not often seen in news reports.

“I set out to make this film because so many fossil fuel extraction projects are slipping under the radar ” he explains. “The human story of the impact upon communities and people’s will to fight back rarely escapes the activist bubble, yet I think this is the key to effectively communicating the climate crisis and how we stop it.”