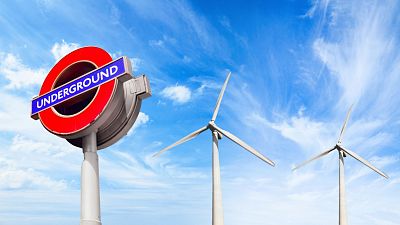 The London Underground could soon be entirely powered by renewable energy. The move is part of a plan to make the city’s famous rail network zero-emissions by 2030, and have the entire city become carbon neutral by 2050.

Transport for London (TfL) is London’s biggest electricity consumer, and one of the largest consumers in the UK. It uses 1.6TWh every year, the same as 437,000 average homes.

The Tube alone consumes 1.2TWh every year and that is without any of the buses, trams and overground trains that make up the network.

A recent study by British Business Energy calculated that 200 wind turbines or 5.6 million solar panels would be needed to power the network completely on renewables for one year. That many solar panels would take up the same amount of space as the London Borough of Kensington and Chelsea.

A city powered by renewable energy

“As one of the single biggest purchasers of energy in London, it is important that TfL leads the way on green energy,” said London Mayor Sadiq Khan. “This is a vital step towards my ambitions for TfL - and London - to be zero-carbon by 2030.”

City Hall is looking to expand the use of renewable energy in the future to its entire estate. That would cover all of the TfL network as well as the energy requirements of the police and fire services. The decision by the London Mayor was welcomed by environmental organisations including Greenpeace and the Renewable Energy Association.

“This work to secure cost-effective and renewable energy for the rail network, with ambitions to include the wider [Greater London Authority] group and beyond, will play a key role in London’s green recovery and accelerating action on the climate emergency,” Khan added.

What about reducing electricity use altogether?

With nearly half of UK businesses working remotely due to COVID-19, commuting may never return to what is what before the crisis. People have got used to more flexible working hours and 45 per cent of people are expecting to have more flexibility in their work hours after lockdown ends.

If 45 per cent of London’s commuters continued to work remotely in the future, it would save over 460 thousand kWh of electricity, the same as powering 46,000 homes in the capital every day.