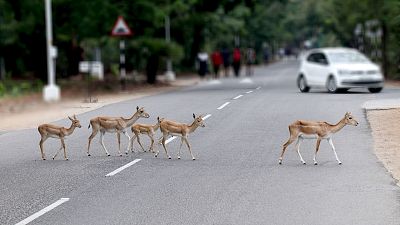 Millions of animals are killed annually by European drivers, leaving some species at risk of extinction.

It’s estimated that 194 million birds and 29 million mammals die on Europe’s roads every year, and now scientists have identified the species most at risk, using data from 24 countries. But already vulnerable species may not be the ones most likely to disappear, the research has found.

There was no correlation between roadkill hotspots and the places with the highest populations of endangered species. Roads in Central European countries, such as Austria, Czech Republic and Germany, were found to be the most deadly for wildlife.

The density of roads in Europe is one of the highest in the world with 50 per cent of the continent less than 1.5km from a paved road or railway.

Small mammals and animals that come out at night face the biggest threat from collisions with cars according to the Centre for Environmental and Marine studies in Lisbon. The species killed most frequently are the common blackbird and the soprano pipistrelle bat.

“Roads are therefore a significant threat to wildlife,” says co-author of the study, Dr Manuela Gonzalez-Suarez, “and evidence shows deaths on them could even cause some species to disappear completely.”

These species are not necessarily the ones you might expect, however. The study found that the long term survival of some animals considered common in Europe was under threat from busy roads. The hazel grouse, a small bird species, and the russet ground squirrel could become locally extinct in places where roads put wildlife most in danger.

This means that conservation projects aimed at preserving wildlife when new roads are being built could be targeting the wrong species. Dr Gonzalez-Suarez says that the “long-term vulnerability of species is not currently considered when assessing the impact of new roads on wildlife, meaning we risk channelling support to the wrong species, doing nothing to help those most at risk.

“Better understanding of which species are most vulnerable to roads is therefore important if we are to take more effective conservation action.”

In the US, the drop in traffic during the COVID-19 pandemic has reduced the number of animals killed by cars significantly. Data from three states, California, Idaho, and Maine, suggests that wildlife-vehicle conflict reduced up to 56 per cent from early March to mid-April. If this reduction continues it will result in up to 13,000 fewer large mammals being killed this year in these three states alone.

Mountain lions, in particular, were found to have benefitted from the reduction in traffic. The big cat has survived habitat loss and extermination campaigns, but rapidly expanding highway networks in California have left them severely threatened.

It isn’t just the number that are killed by cars but the inability to cross large busy roads that are putting the mountain lion at risk. Populations are hemmed in by highways leading to inbreeding, which the Centre for Biological Diversity says could cause the species to disappear within 15 years.

Mountain lions are reportedly hit by cars up to twice a week, but in the 10 weeks after residents of California were issued stay-at-home orders, deaths decreased by 58 per cent. The new data has helped conservationists establish a clear link between the decline of the species and the busy roadways in the state.

”This means that to reduce mountain lion mortality, populations must be protected from traffic,” the study’s authors say, “especially in the Bay Area and Southern California where isolated and small populations of mountain lions are at risk of extinction.”

Now they are hoping to install the world’s largest wildlife crossings in one of the mountain lions’ most important habitats, the Santa Ana Mountains. It will help reduce the number of these big cats killed on the busy Route 101 highway and allow populations to mix, therefore preventing the problem of inbreeding.

In pictures: the best images from this week’s news stories