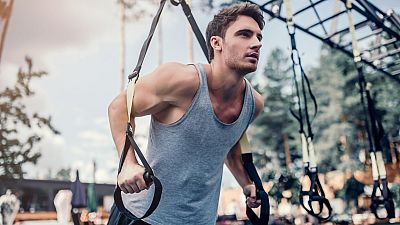 Lockdown measures are relaxing across Europe, but fitness-lovers in the UK weren’t happy to learn that gyms will stay shut across Britain for the foreseeable future.

Elsewhere in Europe gyms and swimming pools are starting to reopen, with France and Spain welcoming back visitors next month. Italy is Europe’s biggest fitness spender according to Myprotein, with over 18 million regular gym goers in the country, so perhaps it’s not a surprise that Italian sports centres were the first to reopen back in May.

But even if your local gym has re-opened its doors, you may not be all that keen to return just yet - and you aren’t alone in feeling that way.

Medical professionals support this wariness too. Dr James Voos, chairman of orthopedic surgery at University Hospitals Cleveland Medical Center authored a study which considered just how contagious spaces like gyms are. “When you have a relatively high density of people exercising and sweating in a contained space, you have conditions where communicable diseases can spread easily,” explains Dr Voos.

The safest place to exercise, according to infectious disease expert Dr Sandra Kesh, is outdoors.

“When you have a relatively high density of people exercising and sweating in a contained space, you have conditions where communicable diseases can spread easily.”

So what are the best outdoor alternatives? We’ve rounded up three of the best activities to keep your body and mind healthy, while getting outside and enjoying nature.

Okay, it’s not the most conventional form of exercise - but if you want to social distance and enjoy nature, there’s nothing like paddleboarding.

Why not try putting it to the test on your local canal. In the UK, Manchester's Bridgewater Canal is an idyllic setting to give paddleboarding a go. Sure, it’s not the Mediterranean, but as the towpaths either side bustle past with joggers and cyclists - you can't help but feel a little smug with all the space you have on the water.

Instead of avoiding traffic or tangling yourself up with dog walkers, as you might usually when out running, you can spend your paddle in the company of a gaggle of ducklings.

It’s a great full body exercise, really putting your core to the test, without being a high impact workout like running or a fitness class. Sure, it’s not the most accessible sport, but more basic boards are pretty stable and easy to get to grips with.

What used to be a fairly niche sport is now a little easier to start, with more boards on the market than ever. Consider trying one of Red Paddle Co’s inflatable boards - which are a far cry from the blow-up lilo type structure you might expect. These start at around €950, so aren’t the cheapest, but they feel like they last. Cheaper alternatives include Decathlon’s beginner board, which costs about €330.

A more conventional option here, but it’s well worth considering as a gym alternative.

Cycling is another low-impact sport, so it’s somewhat easier on your joints, while still ensuring you get a proper workout.

Fortunately cycling is a pretty well-loved sport in Europe already, as eight European countries make the top-ten list for nations with the most bikes per capita. The Netherlands is an unsurprising winner, with 99.1 per cent of the population owning bikes. Denmark, Germany, Sweden, and Norway round out the top five, with Finland, Switzerland, and Belgium also making the list.

If you’re not in a country with a strong cycling legacy, now is still an ideal time to start. There are far fewer cars on the road right now, which makes riding safer and easier than usual. Plus, if you get into cycling now, you’ve developed a great new commuting method for the future.

Though cycling is obviously a great way to experience nature and see the area around you, if the weather is rubbish, or you aren’t confident on the roads, consider setting yourself up with Zwift, the virtual cycling community. You can spend your mornings cycling around New York’s Central Park, without ever leaving your home.

Yes, we could have put running on this list but it seemed a little too obvious - so this is running’s eco cousin. Sure, going for a jog shouldn’t do much environmental damage, but plogging is a chance to make an actively positive impact on your local surroundings.

But what is it? Plogging is effectively running or jogging while litter-picking at the same time. It’s a Swedish craze, and a portmanteau of ‘jogging’ and ‘plucking’ - where runners collect rubbish as they run.

It’s advised that you wear gloves and carry a bin bag with you, especially at the moment where you want to minimise any risk of contamination, but it’s a great way of keeping parks and beaches clean.

There are several plogging communities around the world, so if you fancy sharing your exploits on social media - there’s a host of new friends to be made.