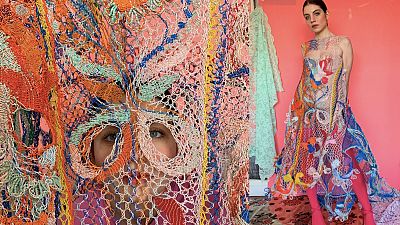 A UK-based fashion designer has found an innovative use for throwaway electrical wires, creating garments and accessories out of the waste material.

Alexandra Sipa, a recent fashion graduate from London’s prestigious arts university Central Saint Martins, was inspired to start the project after her phone charger broke. The 23-year-old decided to source discarded electrical wires from a recycling centre and her uncle’s construction site, before handcrafting her unique take on lace.

“My graduate collection was driven by my motivation to create innovative luxury textile from waste,” explains Sipa. “I used wires to develop garments and accessories by hybridizing multiple lace making techniques, both traditional Romanian techniques and popular Western techniques.”

So far Sipa has made a dress, ruffle coat, vest, bag, and a range of accessories out of the wire lace, and plans to expand on this collection post-lockdown, when she is able to access further resources.

For Sipa, it’s important that her work is “grounded in something real,” which is why her Romanian heritage plays a significant role in her work.

“Conceptually the collection was driven by the contrast between the heightened austerity and extreme femininity in Romania,” she says. On a more personal level, Sipa was also drawn to incorporating waste into her work after watching the way her grandmother would “use whatever she had to make art or decorate her home.”

The collection is also a chance for Sipa to “show a side of Romania that hasn’t been shown that much: a prosperous, rich, and beautiful side full of opportunities.”

While the designer has worked with other discarded materials before, electrical wires carry a prominent political message for her, as she hopes to highlight the growing issue of electronic waste.

“I don’t want my work to simply be pretty for the sake of being pretty,” explains Sipa, “waste is becoming a global and environmental problem. The fastest growing source of waste is electronic waste, reaching 50 million tonnes worldwide in 2020. Technology companies are openly admitting to planned obsolescence, but still barely anyone is talking about it.”

Sustainability in fashion from the inside out

Sipa is also well aware of the issues in fashion as an industry too, and hopes projects like her collection can help to effect positive environmental change. She says, “unfortunately fashion, the industry and medium I’ve loved since I was young, is often one of the worst offenders in relation to the climate emergency.”

The industry is one of the world’s most significant polluters, as the Ellen MacArthur Foundation found in a major report into the industry and sustainable fabrics, nearly 150 million tonnes of clothing will be in landfill by 2050. The report also argues that fashion needs to introduce the idea of a circular economy, where materials are reused and “re-enter the economy afterwards, never ending up as waste.”

Fashion needs to become more sustainable from the inside out, not only in the materials used, but also ethically in the treatment and compensation of workers.

But sustainability isn’t just about the planet either, Sipa is equally passionate about the industry’s human impact. “Fashion needs to become more sustainable from the inside out, not only in the materials used, but also ethically in the treatment and compensation of workers in the production chain and workers designing the clothes,” explains Sipa.

“The industry promotes the idea that creatives are less passionate or driven if we have a work-life balance and don’t push our bodies and minds to their limits everyday. This isn’t sustainable.”

Positive change is just around the corner for the industry, she feels. The coronavirus pandemic has been monumental in shifting some brands’ perspectives, particularly after fashion weeks were cancelled and/or forced to go online this year.

“I believe real change is coming,” says Sipa. “The industry is becoming aware of the urgency for change due to the climate emergency and the increasing demand from consumers for more sustainable options.”

This is something the young designer hopes to pursue now that she has finished her degree. Sipa’s aim is to work within a haute couture house, as she feels that “sustainable textile innovation and couture go hand-in-hand.” In the meantime, she plans to keep experimenting with electrical wire lace, considering how it can be produced by a machine and hopes she can find an application for the textile beyond garments.