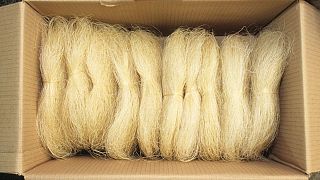 Copyright  © Cultural Heritage Administration of the Republic of Korea
By Rosie Frost  •  Updated: 23/07/2019

So far in our investigation into sustainable fabrics we’ve looked at a number of options that you almost certainly heard of. Leather, linen, and Tencel are all relatively common fabrics to find when browsing through clothes, bags and shoes but a fabric you probably won’t have seen is ramie. Woven from the fibres of a plant closely related to the nettles you might find in your local park, it is a luxurious and full of potential.

Despite being less common in Western countries today, ramie has been used for thousands of years. From over 2000 years ago it was the material of choice for the wealthy Korean upper classes, particularly in summer because of its ability to keep you comfortable in hot weather. So integral is its production to Korean culture that the complex process of weaving the fibres into the highest quality fabric is listed by UNESCO as a protected piece of intangible cultural heritage.

Where does Ramie come from?

In the same family as nettles, the ramie plant has silvery leaves that are traditionally used in desserts in South East Asia. It is the inner bark of the stems that go to making the fabric as its long fibres help to create the smooth weave for a quality textile. The plants grow very quickly and so these stems can be harvested at least three times a year but sometimes up to six!

Ramie plants are native to East Asia where they have been grown for millennia. It is now mainly grown in China, Brazil, the Philippines and the Lao PDR. Whilst it is extensively used in the countries where it is processed it is rarely exported with only a small percentage reaching the international market. This makes it a vastly underused fabric with potential to help solve fashion's sustainability problem.

So, how sustainable is it?

As the plant grows incredibly quickly it allows for high production of fabric in a short space of time on small pieces of land. It's not just its rapid growth, however, that makes ramie an easy crop as the plant is naturally resistant to bacteria, fungi, rot and a whole host of other destructive forces. Grown without pesticides and using the natural rainfall, the plant from which ramie is made has relatively little negative environmental impact.

Ramie, however, cannot be broken into its useful components with just sun and water like some natural fibres. The process of separating the bark from the rest of the plant still requires chemicals. There is some research into creating a more environmentally friendly process that uses enzymes but this is not yet widely adopted in the industry.

Like many other natural fibres ramie is biodegradable so will break down completely once you are done with it. It isn’t as strong as silk or linen though, and the brittle fibres will break if bent repeatedly in the same fashion. Given the labour intensive process that leads to its production, a short life is not great for ramie’s overall sustainability.

How to wear Ramie

Ramie fabrics hold their shape incredibly well like linens but have a far more silky appearance. This makes them good for clothing like skirts, dresses and shirts that needs to be draped in a certain way. Although it holds its shape, ramie does still crease relatively easy which means it will need more ironing, something that increases its potential overall carbon emissions.

The fabric doesn’t hold on to dyes in that many colours but the naturally pale colour produces a beautiful white cloth. It is also great for temperature regulation as it is breathable and moisture absorbent so could be a good material to consider when looking to add to your summer wardrobe.