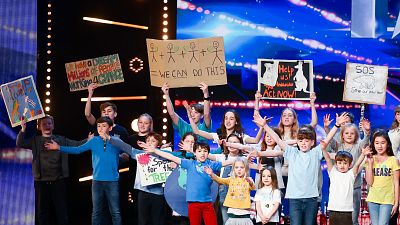 An eco-choir of four to sixteen-year-olds appeared on the popular UK talent show, Britain’s Got Talent, this weekend. The children performed a heartfelt song dedicated to saving our planet threatened by the hands of climate change.

S.O.S. From the Kids made an environmental plea to a TV audience, asking grown-ups to “take note” of the climate crisis and “change the story” of the future. “There’s only one world for us to share”, they sang, while holding up signs calling for us to act now, to save the polar bears and the bees and to stop putting plastic in our oceans.

Britain’s Got Talent judges included Simon Cowell, Amanda Holden, Alesha Dixon and David Walliams, all of whom appeared moved by the performance. Amanda Holden could be seen wiping a tear from her eyes, seemingly overcome with emotion.

Some of the children, including founder of the choir 12-year-old Sim Macaulay and his brother Noah, sang solo lines to communicate the message. In one line, Sim references big brands and corporations who refuse to acknowledge the urgency of the crisis.

“Don’t listen to the fat cats, they only want their cream. Always need oil, for feeding their machines.”

The children then go on to sing about biodiversity and conserving our wildlife, as another little boy chimes in, “we must care about the animals, care about the trees,” followed by “I’ll need help from you, you get help from me,” sung by two young girls.

The choir ended their original song with a line full of hope, “we can do better than this,” before receiving a standing ovation from the studio audience and all four judges.

Organisations like Julie's Bicycle and Music Declares Emergency are already tapping into the music industry to bring about environmental change. Music Declares Emergency unites artists and industry professionals calling for an "immediate governmental response to protect all life on earth." The group believes in the power of music to promote the cultural change needed to create a better future. Art festivals such as Season For Change also encourage musicians to come together, showcasing art that has a powerful, emotional effect on listeners.

Lewis Jamieson, spokesperson for Music Declares Emergency tells Euronews Living, "to see a group of children transmit a message of action and hope to a massive TV audience is a wonderful thing. All power to them."

After watching David Attenborough’s documentary ‘Climate Change – The Facts’, brothers Sim and Noah Macaulay from Liss, Hampshire, were inspired to start singing about climate change and what we can do to help.

Alongside their mum, Dorry Macaulay, the boys recorded their song ‘SOS From the Kids’ with help from cousin, Coen Baines. Before long, other kids in the area were keen to get on board too.

In November last year, the choir travelled to London’s Parliament Square to perform at the Global Youth Strike for Climate. David Attenborough thanked the brothers for their contribution himself. He wrote a personal letter to Sim and Noah paying tribute to them for all their hard work.

S.O.S. From the Kids has now released its first single, ‘Stand As One’, a song to thank front-line workers in the fight against COVID19. Song profits go to NHS Charities Together and Masks for NHS Heroes.