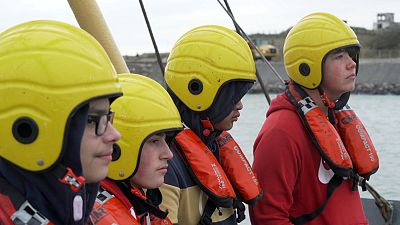 The European Union has stepped in to help small fishing communities preserve their way of life, as young people turn away from the job that their forebears did for generations.

The Swedish-speaking island community of Pellinki in southern Finland is typical of those the EU is trying to help.

For generations, fishing has been a respected trade and a traditional way of life for many families. But today, the number of local fishers is dwindling. Only a few remain.

One reason is declining catches. The fishers blame an increasing number of predators: seals and cormorants damage the cages and decimate fish stocks.

Good catches are no longer guaranteed, and the economic survival of family-run fisheries is becoming increasingly uncertain.

Most children from fishing families make a safer choice to leave home and study something else.

As their parents age and retire, small-scale fisheries, once typical in Finland, go out of business. Nationwide, the number of professional fishers has declined in recent decades from 1800 to around 400.

Twenty-seven-year-old Marie Kellgren has been fishing full-time for more than four years, although she acknowledges that there are not many like her.

"We’re not many - young people fishing. I think it’s because it’s physically hard work, and you don’t know for how many years you can do it. It's a big risk to start."

She initially went to study tourism in Helsinki but then took up the opportunity of a local “Master-Apprentice" program to learn the trade from her father.

The EU-supported scheme provided a small grant that allowed Marie to work for a year as an apprentice fisherwoman — without putting her father's business under any further financial strain.

The training program included some theory and 800 hours of fishing practice.

"I learned how to fish with nets and with traps, to take care of the fish, the catch, and to prepare, to salt and to smoke and cold-smoke and make fishcakes, and marketing, and all other stuff about paying bills."

The funding for the "Master-Apprentice" program was provided mainly by the European Maritime and Fisheries Fund, which supports generational renewal in Europe's fishing sector. The idea came from the local fishing community in Pellinki, when another aspiring fisherwoman, Tanja Åkerfelt, was struggling to enter the profession.

"My father didn’t think that was a good idea,” Tanja said. “That’s when I had to talk to other fishermen, wondering, how could we do this.”

One of the fishermen she spoke to was Esko Taanila, who manages the partnership between private and public stockholders in the local fisheries sector, known as a FLAG — Fisheries Local Action Group.

Taanila came up with simplified paperwork — a formal contract and the training program for both the master and the apprentice.

Training a new fisher costs around 6,000 euros. Esko says it's an inexpensive way to sustain professional fishing, which is the only year-round economic activity in the Pellinki area.

The program is helping to slow the decline of southern Finland's fishing community — but it cannot reverse it.

Taanila said: “Every time 10 fishermen quit, we get one or mostly two young people who are interested in continuing."

The program has been running for three years. Out of 15 apprentices, 12 decided to keep fishing professionally.

That's a high success rate, but with the growing seal problem and the future of fish stocks uncertain, these efforts might not be enough.

"We have to get new fishermen because the average age here is 60 years old,” said Taanila. “So if we do nothing, it will take only five or six years and everybody will have quit. It is very important that we have a living fishery in our coastal areas. Without that, it could be a dead area. And that’s not nice."

Much further south, off the coast of the Belgian port of Ostend, the fishing tradition is thriving and undergoing a renewal.

A local maritime school – the Maritiem Instituut Mercator – runs a dedicated training ship, which was renovated with EU help.

Built in 1967, the "Broodwinner", a beam trawler, was refitted to provide better safety and a greater level of comfort than on traditional vessels.

Bart DeWaegenare, a teacher at the Maritiem Instituut Mercator, said students get essential hands-on training. Most of them don't have the sea in their blood.

"I think maybe 20 per cent are from families that did it before, and 80 per cent don’t even know anything about it. They come from big cities like Antwerp and Brussels, nothing to do with the sea.”

Students go on eight-hour fishing trips starting from the age of 12. By 16, they spend half of their school time at sea.

Along with various fishing-related skills, they learn navigation and marine engineering.

Most are seeking a job in the maritime sector, but not necessarily in the fishing industry, where the work is hard and the risk of accidents high.

Sami Tebbouche, a student, said: "You have to learn to sail the vessel on your own. You have to wake up at night to repair the nets. It's tough!"

Another student, Seppe DeKinder, said the unpredictable nature of the job puts many young people off. Fishermen's salaries can be very high - or low, depending on the catch.

"It’s unpredictable how much you can earn sometimes. That’s why a lot of people are uncertain if they really want to do it. And also because it’s really hard work. And a lot of people have kids and stuff, and they don’t want to leave them behind."

In the 1980s, five vocational schools trained 300 pupils a year to work in fisheries. Today, only one school with 40 students remains.

Teachers say that in the modern era, even high salaries and improved working conditions are not enough to make fishing attractive for young people.

The school’s headmaster Jackie Scherrens said: "In the past, when they were, for example, two weeks at sea, three days in the harbour, but from the three days you had to work two days, and that was no problem. Now, when they are, let’s say, eight days at sea, four days in harbour, and you have to work one or two days — they don’t want that anymore! So it’s very difficult to attract young people for it."

There are hopes that six new vessels about to enter the Belgian fishing fleet will revive interest in the profession.

The importance of restoring marine biodiversity