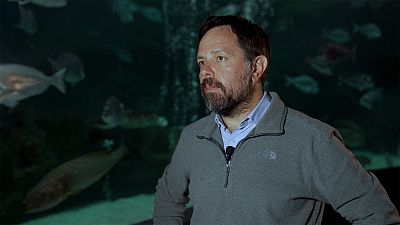 Scientists estimate that roughly one million land and marine species may become extinct in the foreseeable future. Many within decades.

What are the main reasons for the decline of underwater ecosystems?

Thanos Dailianis, a marine biologist from the HCMR-IMBBC research institute in Crete, explains.

“Marine ecosystems are threatened both locally and globally. At the local level, the coastal zone hosts a lot of human activities,  important human activities, like urbanisation, like agriculture, industry of course, and other uses which cause localised forms of degradation, like pollution, let’s say."

"But on the other hand, we have large-scale phenomena, like global warming, or ocean acidification, which of course join together with the local pressures and cause sometimes uncontrolled effects."

"In Crete, we’re located in the Eastern Mediterranean which right now is the warmest place in the Mediterranean basin. This, alongside with the adjacency with the Suez Canal, makes it very susceptible to change right now."

"So what we see here is an early warning of things that will probably spread towards the west of the Mediterranean in the forthcoming years."

"And of course, these things also happen at the global level. Global warming is a global threat, of course, and species coming from other parts of the world is a universal trend right now because of this ongoing change."

"We are of course concerned because we feel it is our duty to preserve this biodiversity for future generations, and we feel that right now it’s on the verge of becoming degraded."

"Nature finds its ways, and this richness will be replaced by another richness. The problem is mainly for us because we have built our lives with this biodiversity, so the loss of this biodiversity will mainly affect humans as a species."

"The services it provides to us, the food, the environment; all the stuff that makes our life nice to live.”