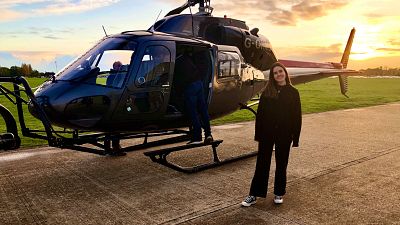 It’s about 4.15pm and the sun is going down on a crisp November day, as we weave our way through the financial centre, past the Shard and on to St. Paul’s Cathedral, practically skimming office blocks as we go. I look out for the sprawling green mass of Hampstead Heath, spot Kenwood House, and count the bridges along the River Thames as we fly up the Southbank.

All the while, Director of Photography Jeremy Braben is sat adjacent to me with a monitor on his lap, in charge of capturing the city from above, with an aerial camera. Braben is CEO at Helicopter Film Services (HFS) and spends his days in the sky shooting footage for feature films. A man whose first big break came as aerial photographer was for Titanic, and whose CV boasts all the great directors, from Steven Spielberg to James Cameron.

We’re flying over London so Braben can show us how shooting from the sky works and how he manages to capture those grand, panoramic shots. Whether it’s a two second pan of a city skyline at night or a landscape vista acting as a backdrop for some CGI - aerial shots are at the core of any feature length film.

At first glance, there doesn’t seem to be a green aspect to helicopter filming. But I learn that HFS has chosen to become the first in its sector to carbon balance emissions, which is why I’m interested. As Europe’s leading aerial filming business, it is setting the bar high in the film industry.

As we soar over Trafalgar Square and the National Gallery looks like a mere doll's house from above, CEO Jeremy Braben admits aerial filming “is no friend to the environment.” As such, the company has sought out an aviation specialist to calculate their annual emissions. HFS now partner with C Level, a B-Corp specialising in carbon balancing, which helps reduce its “fairly hefty carbon footprint”, he says.

To offset the carbon generated from aircraft, they work with C Level’s various projects all over the world. In particular, a project called CommuniTree which aims to achieve indigenous reforestation in Nicaragua by planting 5 million trees, sequestering 700,000 tonnes of CO2, and providing 3,500 jobs. Equally, the money HFS invest is helping to protect forests in Tanzania through supporting threatened Hadza hunter-gatherer tribes, enabling 100,000 tonnes of CO2 to be sequestered.

Specialists like C Level are concerned with taking a more holistic approach to ‘carbon balancing’, having first coined the term in 2003. Daren Howarth, CEO of C Level explains that he prefers the term ‘balancing’ to ‘offsetting’ as it implies longevity, rather than the “done and dusted approach of carbon offsetting.” His hashtag #burntitbalanceit is bound to catch on.

What is the carbon footprint of the film industry?

Without a doubt, the movie industry has a long way to go when it comes to operating more sustainably. Aside from aerial filming, there's the amount of energy needed to power sets, cameras, lighting and studio facilities, post production, costumes – it all adds up. Concerns are even growing about the carbon footprint of streaming films on platforms like Netflix. Streaming video over the Internet at home is estimated to be the equivalent to having two or three old-fashioned incandescent light bulbs on, according to computer scientists at the University of Bristol.

I spoke to Aaron Matthews, Head of Industry Sustainability at BAFTA and founder of green production platform Albert. Albert is starting the conversation around what film makers, directors and producers can do to revolutionise their creative process, by encouraging them to use their carbon calculator tool.

“The average television programme produces tens of tonnes of carbon dioxide, a feature film is in the thousands,” Albert explains. “Little consideration is given to the carbon emissions created from generators, or where beautifully crafted props spend the rest of their days.”

Painting a picture for the future of film, the platform's mantra reads, "imagine walking on to location, silent except the sound of the crew. Imagine it, because it’s where we are heading – powered by the wind and the rays of the sun.”

Aaron Matthews alerts me to the numerous tips the platform provides, offering advice from how to charge equipment in remote locations and taking the plastic out of production, to highlighting positive examples like Jamie Oliver’s crew choosing to go meat-free on set.

Organisations like Julie’s Bicycle and Music Declares Emergency are also fighting to combat the ecological impact of the performance industries. “Carbon emissions, fuel resources and air pollution from the transport associated with touring any kind of production [is] one of the largest sources of an organisation’s carbon footprint”, says Julie’s Bicycle in its Practical Guide to Touring. It’s still slim pickings when it comes to performers setting an example. But artists like Billie Eilish and Coldplay have recently announced green world tours, in fact Coldplay has refused to go on tour at all, for environmental reasons.

While film aviation services are certainly liable for their carbon footprint, it’s clear that the Arts industry as a whole needs to be held accountable. Carbon balancing schemes are a step in the right direction, but more can always be done. I conclude with DoP Jeremy Braben that green solutions are anticipated in order to improve the environmental impression of aerial filming. Whether that’s increasing the use of drones instead of having to power helicopters, or a transition to sustainable biofuel.

Do I feel guilty for flying over London in order to experience what it’s like to film from above? Yes, I do. But I also feel a renewed sense of optimism after learning just how much the film industry is investing in environmental initiatives. I’ll be looking out for the footage we took in the next Marvel film.