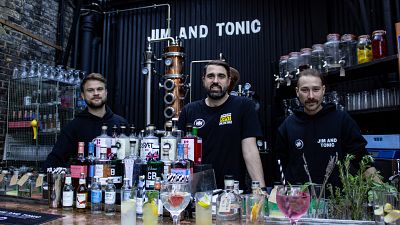 The distillation of gin has a long-held, sometimes chaotic, role in London’s history. From Dutch influence to unregulated bathtub mayhem in the 17th century, the drink is as quintessentially British as an afternoon cup of tea. It would be easy to assume that the production process of this traditional spirit would be a difficult place to introduce revolutionary theories of the circular economy but south London gin brand, Jim and Tonic, are here to prove that sustainability is the next natural step for the drink.

Amongst the maze of Mercato Metropolitano’s food and drink market, Jim and Tonic’s main location creates and serves their three unique handcrafted gins. The all in one bar and distillery is surrounded by swathes of green and strings of fairy lights that give the outdoor seating area an inviting glow; it’s not hard to see why it was packed with people throughout this summer’s warm nights.

Established in 2016, the team have built responsible, local sourcing into the bones of their business choosing to base their spirit crafting enterprise in the sympathetic community of the market. Active advocates of embracing the UN’s 17 sustainability goals, Mercato Metropolitano centres sustainability and social inclusion as priorities and expects the businesses it houses to do the same.

It can seem these days like sustainability is a buzzword flaunted by brands making the bare minimum of effort but for Jim and Tonic it was a founding ethos as they attempt work circularity into everything they do. “Master Alchemist”, Seb Barnick, is in charge of the botanicals and his experiments sit in Kilner jars on a shelf behind the bar. The team say that one of the latest ventures is an attempt to create limoncello from the peel of lemons leftover from drinks served at the bar.

Local sourcing is also exceptionally important to the brand with urban farming techniques being adapted to grow the herbs and spices that go into giving gin its flavour. Currently, a hydroponic green wall that has been providing these ingredients for previous batches is undergoing a massive refurbishment to keep the whole process within a 10 metres radius.

The biggest sticking point for their local sourcing is the essential juniper berries that give the spirit its signature taste. “Juniper is endangered,” founder James Mark says, “ these days it usually comes from Sardinia”. Both the number of plants and places that it can be found in the UK has been rapidly declining possibly due to browsing animals and root rot according to the Woodland Trust. To reduce the distance their crucial botanical travels and also help to rejuvenate lost biodiversity the company are hoping to set up a partnership with those trying to protect the plant, James says.

What Jim and Tonic is creating goes beyond your grandma’s favourite London dry and tonic, however. Mixologist, Seb, claims gin as his passion and the innovative menu he has concocted certainly reflects his appreciation of the drink. There are plenty of traditional tonic based options but Seb hopes to appeal to less conventional fans of the beverage. “If you don’t like gin it’s just that you haven’t found the right gin yet,” he says.

One surprising item on the cocktail menu features their own product mixed with beer. Kraft, the distillery's gin selected for this combo, is made using hops from a neighbouring microbrewery, German Kraft and is paired here with a citrusy British IPA in a partnership that brings out the best of both ingredients. It’s distinctive and a world away from the sweet floral flavours commonly associated with gin.

Read More | Would you still enjoy a nice cold beer if the bottle was made out of paper?

Reuse not recycling for a circular economy

“Running a bar creates an incredible amount of glass waste,” says co-owner Chris Godwin, adding that he is surprised that looking to reuse glass isn’t a path that other spirit manufacturers are naturally pursuing. Recycling is often touted by businesses as a positive step towards achieving minimal waste output but recirculating those bottles back into use without being melted down is both cheaper and better for the environment according to the "waste hierarchy". With a relaunch of all new packaging close on the horizon, the brand is looking to establish a return scheme that will allow customers to bring their empties back to be refilled and extend their useful life. After each return, they would be stamped with the number of uses to help customers recognise the value of highly reusable materials like glass.

Despite considering their environmental impact as part of every business decision, the owners acknowledge that there is still more they could do. Currently, one of the vans that they send out to events is being retrofitted with an electric engine by a company that sources their parts from crashed low emissions vehicles. Although James says this will only allow them to travel 120 miles without charging, it reduces the emissions they accrue by travelling to cater for weddings and birthday parties.

The future looks exciting for the brand. As a new venue opens in the unique St Mark’s church, Mayfair as part of Mercato Metropolitano’s expansion they are also exploring new directions for their range of spirits. In an unlabelled bottle, the team present their most recent vodka trial which has a caramel smoothness reminiscent of established premium brands.

You can buy Jim and Tonic's south London made gins on their website or find the team at both of their Mercato Metropolitano locations.

These Cuban bartenders have been making cocktails from native plants

From Milan to Mayfair: How I built London's most sustainable food hall