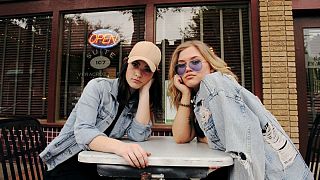 Let’s face it, we are ‘Generation Rent’. Millennials as marketers like to call us (i.e. 25 to 34 year olds) are not buying property nowadays, with renting figures having trebled since the 1990s according to the Institute of Fiscal Studies. We are living in an age of virtual libraries where we stream music and films online, without needing to own any of them. Gone are the days of CD and DVD shelves piling high – nowadays we essentially ‘rent’ our entertainment. So why wouldn’t we be coveting the same concept for our wardrobes.

As the environmental crisis reaches breaking point, the demand for ethical clothing has increased exponentially, with 66% more searches for ‘sustainable fashion’ occurring since 2018, according to fashion search engine Lyst. Rental fashion is a relatively new phenomenon taking the industry by storm, with platforms like Hurr Collective and Higher Studio taking off in the UK, alongside more established US-based Armarium and Rent The Runway. But what is the booming rental fashion industry all about and is it all that it seems?

Renting ‘pieces’ is no longer reserved for the rich and famous, used to receiving haute couture attire on loan for a shoot or a red carpet event. Plenty of rental fashion sites now offer you - and me - the chance to ‘hire’ a piece of clothing for a fraction of the retail price, before returning it a few days or weeks later. A promise of varying our wardrobes week to week.

“I’m totally on board with the idea of renting for special events – I have 5 weddings this year,” says Who What Wear UK social media editor, Alyss Bowen. Alyss is a customer of UK-based Hurr Collective, which is a peer-to-peer service renting items over £150 RRP, with rental prices ranging from 10 to 20% of the original retail price.

Hence, you can expect to pay anywhere from £20 to £100 a week for an item and keep it for up to a month. “They offer sought after designer pieces, like the Rixo dress you've seen all over your Instagram feed, for a fraction of the price,” says Alyss. “What's not to love?”

Fashion journalist and model Sara Semic agrees. She describes renting as a “guilt-free way of shopping for a new look, knowing it will have a second lease of life and won’t just gather dust in your wardrobe”. She admits, however, that rental may never totally replace retail: “I think with everyday staples like jeans or white t-shirts that you have on constant wardrobe rotation – you will always need to invest in them,” calling it “human nature to want to own things”.

Launched earlier this year, Hurr Collective is hoping to break out of the ‘special occasion’ market and into people’s daily lives with workwear and holiday pieces. The brand aims to be seen as a “disruptive startup that values access over ownership” according to its founder Victoria Prew.

“We are building HURR as the ‘Airbnb of Fashion’ echoing the shift towards a sharing economy and smarter, more conscious fashion consumption consisting of forward-thinking women,” she explains.

HURR Collective wants rental to be “part of your day-to-day wardrobe” by taking advantage of “an unlimited ‘virtual’ wardrobe that is both affordable and accessible,” she adds.

What are the environmental benefits of renting clothes?

According to Traid, the charity working to stop people throwing their clothes away and encouraging re-use, fashion pollution is having detrimental effects on the planet. Clothing generates its own carbon and water footprint, with the fashion industry’s CO2 emissions expected to rise to nearly 2.8 billion tonnes per year by 2030. Equally, UK adults reportedly only wear 44% of the clothing they own and, as such, more than half of the fast fashion produced is disposed of in under a year. Around 350,000 tons of clothes, at an estimated value of £140 million, go to landfill every year in the UK.

Wellness entrepreneur and model, Danielle Copperman, admits she was originally sceptical about renting. “I have toyed with the idea of clothing rental services for a while, but it always seemed a bit complicated and time consuming. What with picking up, collecting pieces and having to return them.” But having recently worked with HURR, she liked the concept of not having to buy something new and in turn diminishing her environmental footprint. “Hopefully, with the rise of rental platforms, we can reduce the amount of clothes in circulation,” she concludes.

Stockholm-based sustainable lifestyle blogger Erica Ström believes the option of renting clothes gives her more opportunities to be creative and incorporate new things into her style without the need to buy more stuff. It reduces the burden on the environment of producing new things. “Minimalism and the idea of renting clothes excites me, as a smaller amount of possessions means I don’t need to live in a very big house, meaning I’ll save money, e.g. on heating,” she told Euronews Living.

But why do we need to wear new, freshly packaged clothes all the time? Some believe social media, and Instagram particularly, are to blame. Life coach Jane Evans is a parenting expert, also specialising in self-belief, defined as a sense of security and confidence in yourself. Speaking to Euronews Living about the pressures of social media, she describes Instagram as a “giant security spotlight”, glaring at young people’s insecurities and “telling them they’re not good enough”.

According to Jane, while the environmental benefits of rental platforms are undeniable, they perhaps perpetuate the anxiety young people feel of being seen in the same outfit more than once. Celebrities and influencers appear in new outfits every day on their feeds, and trends like ‘outfit of the day’ (#ootd, currently used on over 270 million posts on Instagram) compel young people to be consuming constantly, whether that be buying or renting.

In 2017, the Royal Society for Public Health conducted a UK survey of 14 to 24-year-olds, asking them about the five biggest social media platforms, Twitter, Facebook, YouTube, Snapchat and Instagram. Instagram was ranked the most mentally damaging of all. The survey details the negative effects of social media on health, mentioning “increased feelings of inadequacy” providing “endless potential for young women to be drawn into appearance-based comparisons whilst online”.

Rental fashion does not “address the problem”, says Jane, it’s merely a “sustainable way to stick a plaster on the problem of mental health and social media pressure.” Working with young people on a daily basis, she describes the crippling fear many of them report concerning what to wear on social media, and even to school, to impress their peers. Jane tells us, “if you can’t afford Botox, the minimum you can do to change your body image is change your outfit in every photo, so that’s what is happening and it’s dangerous”.

While the cons are arguably noteworthy and we must take care of our mental health, renting clothes is undoubtedly better for the environment and the ethics are important too. Spending £25 on ‘fast fashion’, as opposed to the same amount for a luxury rented item for a week, will almost certainly contribute to a punishing industry where workers are paid a pittance and have even lost their lives in the process. The collapse of the Rana Plaza garment factory in Savar, Bangladesh in 2013 serves as a continual reminder that people pay a price for the inexpensive fashion they consume, and dispose of just as quickly.