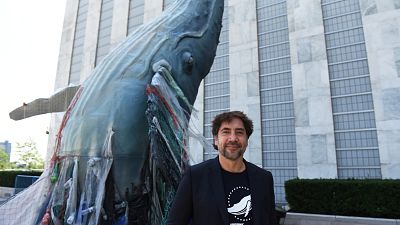 James Bond actor Javier Bardem has taken to the streets of New York’s Times Square to demand greater protection for the world’s oceans ahead of a meeting with the United Nations.

The Oscar winner gave an impassioned speech, calling on delegates at the UN Convention on the Law of the Sea to agree targets and give the green light to a Global Oceans Treaty. Such an agreement would increase the amount of international waters granted environmental protection from 1% to 30% by 2030.

Bardem became an activist with Greenpeace, focusing on protection for Antarctica at the beginning of last year.

“The ocean and its inhabitants know no boundaries. What happens in the high seas, doesn’t stay there. Whales, turtles and fish don’t know our borders,” Bardem told the assembled media in Times Square.

“They are all connected, and we are connected to them. Our oceans are on the verge of collapse and we have all played a huge role in this. Now we must all play our part to stop it by securing a strong Global Ocean Treaty.”

Bardem also posed for pictures alongside a nearly 6-metre tall sculpture of whales and turtles erected by Greenpeace outside New York’s UN building. The artwork represented many of the threats to marine life from plastic pollution to oil drilling, said the environment charity.

This fresh push for a Global Oceans Treaty comes after the Global Biodiversity Assessment Report found more than a third of marine mammals and shark species are currently facing the threat of extinction. Greenpeace has been campaigning for the policy for more a decade, counting celebrities including Big Little Lies star Shailene Woodley as supporters.

“Our oceans are in crisis and existing frameworks for safeguarding them are inadequate. Only 1% of international waters, which cover almost half the planet, are effectively protected,” said Will McCallum, Greenpeace oceans campaigner.

“Restoring the health of our oceans is critical in preserving marine life, tackling the climate crisis, and sustaining the lives and livelihoods of millions of people who depend on them. A strong Global Ocean Treaty will pave the way for a network of sanctuaries that will place at least a third of the world’s oceans off-limits to human activities.”

Dr Essam Yassin Mohammed of the International Institute for Environment and Development said it was “surprising” no such laws were already in effect, suggesting the new treaty should prevent unsustainable fishing and ensure parity of access for developing countries.

“The equitable distribution of conservation benefits of the high seas should also be at the core of the negotiations. Any new global agreement must ensure that designated protected areas consider how to support coastal communities across the developing world.”