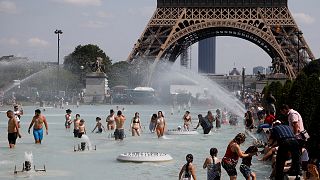 Climate-Update, in conjunction with the European Earth Observation Programme Copernicus, presents the latest monthly update on the global climate: last month was the world's warmest June on record.

Most land and ocean areas saw higher than average temperatures, with the few exceptions including much of western Russia and Canada.

Hot air from the Sahara led to a short but record-breaking heatwave across most of Europe. France hit an all-time high of 45.9°C - breaking the country's previous record of 44.1°C. Overall, Europe saw the hottest June on record by a significant margin, with average temperatures more than 2°C higher than normal.

India and Pakistan suffered their worst drought in decades as well as a deadly heatwave that saw temperatures rise to above 50°C, just short of India's record-high of 51°C.

Heatwaves are expected to become more common as the planet continues to warm under increasing concentrations of greenhouse gases.