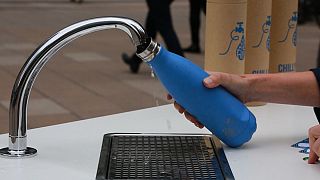 In the UK, less than 30% of people refill their reusable water bottles, according to plastic waste action group City To Sea.

The environmentalists behind the group are determined to bring that figure up. That’s part of the reason they created National Refill Day back in 2015, to make people aware of places they could fill up their water bottles for free around the UK.

Refill is a grassroots movement to help reduce plastic pollution at source by making it easier to reuse and refill your bottle with free tap water rather than buy a new one. It has created an app that can be used to find local Refill Stations that welcome passers-by to top up their water bottles.

Each time someone logs a top up using the app, the campaign’s partners will donate 13 pence – symbolic of the reported 13 millions of tonnes leaking into the world’s oceans each year – to efforts to tackle plastic pollution at source.

This year, the campaign is looking to go global following interest in a host of European cities. It is vying to bring as many Refill stations on board to make the app worthwhile for those outside the UK. It’s not just cafes signing up to become Refill partners, banks and museums have signed up too. As long as the station isn’t a nightclub, place of residence, school or located over an open drain, the scheme is open to all.