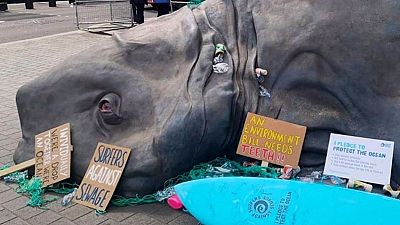 Ocean protection charity Surfers Against Sewage has taken to the streets of London to demand politicians take action against plastic pollution.

The organisation’s members unveiled a five metre model of an unknown sea creature outside the UK’s Houses of Parliament this morning, coinciding with World Environment Day.

The creature, entangled in plastic debris, was intended to remind those in the halls of power that marine plastic waste kills at least one sea mammal or sea bird every 30 seconds, the charity said.

That figure could be much higher in reality, but with 95% of the world’s oceans remaining unexplored, it was impossible to judge impact of plastic waste on fish and other marine life, it added.

“There’s so much about the oceans we don’t know,” science and policy advisor at SAS, Harry Dennis told Euronews.

“We know much less about what’s in our oceans than what’s in space. By continuing to pollute the oceans, we’re poisoning creatures and destroying wildlife we don’t even know exist yet.”

The giant sea creature represented the two thirds of ocean-dwelling life that remains undiscovered, according to scientists. The creature recently featured in a short film released by the Surfers Against Sewage last month to mark the start of its Generation Sea campaign, which calls on government to protect 30% of the ocean by 2030 and completely offset the UK’s carbon emissions by 2050 by removing as much CO2 from the atmosphere as is released.

A post shared by Surfers Against Sewage (@surfersagainstsewage) on Jun 5, 2019 at 4:39am PDT

It is also demanding the implementation of plastic reduction schemes, similar to the likes of Germany’s bottle deposit return system, as well as the development of a tough new watchdog to monitor businesses, public bodies and the government’s actions in relation to environmental law.

The charity is due to speak in Parliament tonight at a meeting of the Ocean Conservation All Party Parliamentary Group. It will bring together MPs, NGOs, businesses, scientists and campaigners to discuss marine conservation issues.