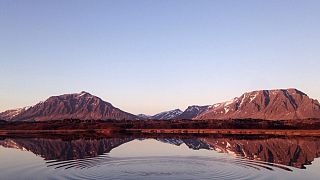 From humble beginnings in a small Canadian town high up in the Rockies, the Banff Mountain Film and Book Festival has for decades been providing outdoor enthusiasts and filmmakers alike a place in which to explore everything mountains have to offer. “It has been going for over 40 years and is a nine-day gathering of adventurers, explorers and filmmakers who love getting out into the wild and making films about their experiences,” tour coordinator Rosie Fuller explains. However, as she notes, not everyone has the opportunity to head to Canada. This led to the birth of the World Tour and from there, the Banff Mountain Film Festival UK & Ireland Tour. This year, the UK and Ireland leg is celebrating its 10th birthday, and doing it in style.

Tales of amazing adventures in the outdoors

As Fuller explains, Banff is a showcase of “some of the best adventure films in the world” and draws the best filmmakers around. The UK & Ireland tour offers two separate programmes of films, blue days and red days, and both have plenty to offer. The festival, Fuller explains, is “to inspire people to go and have (more) amazing adventures in the outdoors of their own” .

Take for instance How to Run 100 Miles, the heartwarming tale of two friends Jayson Sime and Brendan Leonard (the filmmaker of the piece) attempting Colorado's daunting 100-mile ultramarathon, run rabbit run. The film, which features some useful advice to accompany the gruelling scenes (not to mention some fantastic sweeping vistas), is largely one of friendship in the face of adversity.

In fact, overcoming adversity is a striking theme in many of the films picked for the tour. Ascend, from Simon Perkins and Sharptail Media, embodies this idea and shows that the mountains, rather than just imposing and sometimes dangerous places to be, can be a place to heal. After he lost his leg to cancer shortly after finishing college, Mat Wilson went straight back to the one thing that many would never think possible, he got on his mountain bike. As Fuller says, the organisers “guarantee you will leave inspired to push your own boundaries in some way too”.

In a separate entry Perkins meets an unassuming character who embodies the idea of pushing boundaries. In For the Love of Mary the filmmaker follows George Etzweiler, who at 97 is the oldest individual to compete in the 7.6-mile race up Mount Washington. Etzweiler began running in middle age to lose weight but despite his long life, is still to this day driven to run. After the loss of Mary, his wife for almost seven decades, he carries her memory with him every step of the way.

While not necessarily a celebration of the mountains as such Surviving the Outback deserves a spot on the programme for what it says about the outdoors, and in particular the people that call it home. Surviving the Outback follows protagonist Outback Mike (Michael Atkinson) as he revisits the harrowing ordeal of two German aviators who, in 1932, crash landed in a remote area of Western Australia called Kimberley. Were it not for the compassion and help of the Aboriginal individuals that found them, the two would have certainly perished in the wilderness.

Using only the things that would be available to the aviators at the time, plus a healthy dose of his own outdoor skills and experience, Outback Mike attempts to relive the experience of the two airmen. Maybe even more impressively, he manages to film the whole experience himself using a variety of drones. The reason for this, he states, is that any outside help, or even carrying a mobile phone, might risk the integrity of the experience.

This Mountain Life takes viewers from the sun-baked Australian coast to the frozen Canadian wilderness, where mother and daughter team Martina and Tania battle across 2,300 km of ice and snow while crossing from Vancouver to Alaska on skis. Grant Baldwin and Jen Rustemeyer’s film follows the two as they cross the mountains, battling freezing temperatures and loneliness, and eating vacuum packed pre-prepared meals dropped from a friend’s plane.

This epic feat is mirrored by German friends Jochen Mesle and Max Kroneck who, with the help of El Flamingo Films, captured their epic 1,800 km cycle over the Alps in Ice & Palms. However, a simple cycle this is not, as with skis strapped to the their bikes, and later with bikes strapped to their backs, the pair take the chance to make the most of some of the best slopes the Europe has to offer.

But the festival is not purely about adrenalin-highs. Fuller explains how the Tour works closely with the venues to try and make the shows as environmentally friendly as possible. “It is really positive to see how the venues have been improving on this over the last couple of years,” Fuller said. She explains that the Tour also engages with local charities and partners – for example the Fifth Point Diving Centre near Blythe, which alongside regular beach and underwater clean-ups also teaches people how to dive in ways that protect underwater ecosystems – so inspired audience members can get involved at a local level.

The Banff Mountain Film Festival is not the only opportunity to be inspired by the outdoors. Snowline Media also runs the Ocean Film Festival UK & Ireland Tour, which has dates throughout September and October. The festival showcases the most arresting and immersive films from above and below the waves. Also this year the UK will for the first time play host to the Top Dog Film Festival, which pays homage to man’s best friend with films from across the globe. “The tour has seen sell-out success in Australia so we can’t wait to bring it to UK audiences,” Fuller said.

The Banff Mountain Film Festival Tour is still running in various locations across the UK and Ireland until the end of May. For tickets, or more information visit the tour website.