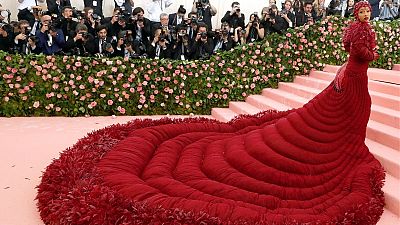 This year, the illustrious Met Gala was all about parody and pastiche. With the theme being ‘Camp’, the question everyone was asking was - who would look the most flamboyant, while making the biggest political statement?

The ‘camp’ theme was inspired by American writer and activist Susan Sontag, namely her 1964 essay “Notes on ‘Camp’” in which she wrote, “the hallmark of Camp is the spirit of extravagance. Camp is a woman walking around in a dress made of three million feathers.” (Cardi B flaunts 30,000 above).

Theatricality and extravagance personified the 71st annual fashion spectacle, with tickets costing upwards of $35,000, all to raise funds for the costume institute at the Metropolitan Museum of Art. A tribute to unsubtlety, no ostentatious outfit was there by accident, with colourful nods to gay pride and transgenderism as designers challenged stereotypes to create an expression of queer culture.

But who was taking sustainability seriously on the red carpet?

Amidst the banana headpieces, androgynous make up and gowns made of 30,000 individual feathers, we are here to highlight the celebrities taking the red carpet in sustainable style. Stand-outs this year include Victoria’s secret angel Gisele Bündchen, in a 100% sustainable dress by Dior, who writes on Instagram: “Yes, fashion can be beautiful and sustainable.”

Equally, musician and drag enthusiast Big Freedia wore a bottle-cap studded tuxedo made of 90% upcycled materials, made by Los Angeles-based Gypsy Sport designer Rio Uribe. The extraordinary tuxedo features nearly 1,000 bottle caps that the designer sourced from one of his interns who worked at a restaurant.

As expected, Livia Firth, creator of the Green Carpet Challenge, arrived dressed to impress in a bright, floral gown by British designer Richard Quinn with a custom headpiece by Stephen Jones. The fabric was sourced directly from Italy, made from recycled materials derived from 100% post-consumer bottles that were spun into yarn. The look was finished off with jewels by ethical jewellery brand Chopard.

As a whole, the Met Gala was not the green carpet challenge we were expecting in 2019, but let's celebrate the stars leading the way. Fingers crossed more leading designers will start to take sustainable fashion more seriously in 2020.