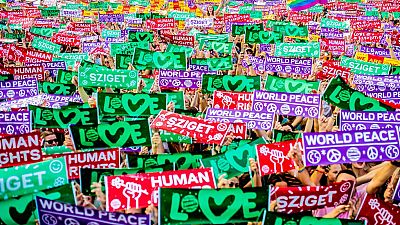 Earlier this year Glastonbury Festival made headlines by announcing that it will implement a site-wide ban on plastic bottles starting in 2019. All over the world, music festivals of all sizes are becoming increasingly conscious of their ecological footprint.

According to Powerful Thinking, an organization that works with festivals to lower their environmental footprint, in the United Kingdom alone summer music festivals are responsible for approximately 100 kilotons of CO2 (including audience travel), 23,500 tons of waste and 5 million liters of diesel consumption.

But it doesn’t have to be this way. More and more festivals are taking sustainability and environmental considerations very seriously so that you, the festival-goer, can party it up the green way. One such festival is Budapest’s Sziget Festival, which has won Best Line-Up and Best Major Festival at the European Festival Awards several times. We sat down with Akos Dominus, Sziget’s Sustainability Manager for the past 17 years, to find out what they’re doing to keep Sziget as green as possible.

When did Sziget really start focusing on sustainability? What came first – the demand for sustainability from the visitors or your own sense of responsibility?

"The latter and it started a very long time ago. Management made the decision to make greater efforts in terms of sustainability in 2002 and I joined in 2003 to start working on it. Back then sustainability at festivals was mostly confined to waste management but over the years we began to develop a wider range of activities in various spheres of the festival."

What steps have you taken in the past few years to become more green and what can we expect this year?

"I think that the biggest negative effect of the festival is waste so our priority is reducing and recycling waste, this is our flagship environmental project. Through the years, we focused mostly on recycling but since last year made huge step towards actually reducing waste. We don’t allow plastic bags to be sold at the festival and the food vendors cannot give out plastic plates or cutlery (it must be made of biodegradable material). Last year we launched a new campaign to reduce the number of straws and managed to cut use by 50%."

"We also try to protect the ground and soil by covering 10,000sq. meters with special covers and then recultivate it. Last year, for example, we recultivated about 3 acres. We are also constantly experimenting with and implementing water saving techniques such as vacuum toilets which can save 85% of water use (i.e. 1.5 liters of water per flush instead of 10 liters)."

"We are always thinking of more new campaigns to save water. Last year we employed a “guerrilla” awareness campaign and found that through some easy communications measures we can encourage visitors who are camping to shower more efficiently. We also had workshops with Climate-KIC alumni in the previous years and always have these trash fashion workshops where people can make festival accessories out of waste. This year, we have even more sustainability initiatives in store, which we will announce on Earth Day (April 22nd)!"

"Those who like to camp at festivals can opt for resting their wary bodies at the EcoCamp, a specialized campsite on the festival grounds that uses solar power and boasts a slow food bar that encourages people to live a slow and sustainable life."

"Because transport is responsible for a very significant part of a festival’s carbon footprint, we’ve undertaken a lot of different tactics to reduce the negative effects: we offer buses and boats to the festival, provide bike facilities and actively discourage visitors through various campaigns from driving their cars here."

"Another initiative that we've had over the past few years was encouraging people to donate their tents to charity because it’s actually a huge issue on a European level. Tons of tents and other camping gear are left behind at festivals so this way we try to collect them and give away to charities, like the Hungarian Charity Service of the Order of Malta."

Are there any other festivals out there that are really leading the way and can be considered role models in the sphere of sustainable partying?

"There is a clear tendency of introducing green efforts at most festivals: we’re seeing a kind of “green” competition because the younger generations is putting huge pressures on the festival industry to be more sustainable. Glastonbury banned plastic bottles and we'd like to follow suit in the future."

"Many festivals are experimenting with energy efficiency projects but, unfortunately, so far there has been no breakthrough because festivals simply need A LOT of energy. Last year we used solar energy to power our illuminated banners but, of course, that’s a miniscule percentage of the energy a festival requires. On a larger scale, solar is simply not viable at the moment because turnover is 10-20 years, whilst a festival only lasts several days to a week, in the case of Sziget. So, as an industry, we’re very far away from being able to use solar to fully power a festival’s needs."

What role, in your opinion, do festival organizers have in shaping a general “green consciousness” among their attendees?

"Huge. We all agree on that. Festivals have a huge impact on youth. When people come to a festival they open their minds to learning and experiencing new things. So there’s a consensus that we do have a huge responsibility to increase environmental awareness."

What tips/advice would you give attendees to enjoy themselves in a more sustainable way at Sziget 2019?

"Smokers – don’t throw cigarette butts away on the ground, always look for a mobie ashtray. Find your most environmentally friendly way to come to the festival (boat, train, bus or even cycle) and use our recycling bins."