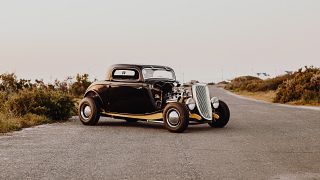 The world’s oldest petrol-powered car, celebrity motors and a back-to-front Renault prototype are just a few extraordinary exhibitions that went on show at the 40th edition of Lyon’s Epoqu’auto expo.

Tens of thousands of motor enthusiasts descended on France’s second-largest collectors’ car show earlier this month, where hundreds of vehicles including trucks, motorbikes, racing cars and vintage showpieces covering over 52,000 square metres were on display in the southern city.

At the end of the three-day event, 56 vehicles were auctioned off, including a Jaguar K2 and Mercedes that once belonged to celebrity couple and fashion label co-founders Yves St Laurent and Pierre Berge.

“We have three main show areas: Renault, celebrating their 120th anniversary; Panhard & Levassor, showing off 32 cars displaying the history of the carmaker, now defunct; and Lamborghini, with 24 cars this year,” Commissioner general of Epoqu’auto, Claude Passot, told Living It.

“There are some exceptional vehicles this year, notably the first-ever Renault – 120 years old – and on the Panhard stand you can see the first ever car with a petrol engine made on a production line in 1891. It’s really an exceptional example.”

Watch some of our best bits from the event in the video player above.