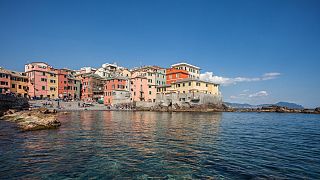 Genoa is a city of many surprises that rewards those who take the time to get to know it. Wedged between mountain and sea, this is Italy's sixth largest city, the capital of the Liguria region, and the country's biggest port. The old port area was once the gateway for visitors and merchants and is still an important gathering place, while the narrow cobblestone carrugi of the historic old town lead to tiny atmospheric squares, miniature shrines perched on the corners of facades, and the majestic Renaissance palaces, which are vestiges of the city's glory days. This is Italy, so there's also superb food and drink to be enjoyed here in the city of pesto and focaccia. From age-old buildings to newly opened nightspots, here's our guide on what to see and do in Genoa.

Redesigned and reconstructed by Genoa's renowned architect, Renzo Piano, on the occasion of Expo 92, the Porto Antico (old port) is a draw for locals and tourists alike and a much-loved public gathering space. Nineteenth century warehouses have been converted into shops, a congress centre and cinema, while a palm-tree lined promenade snakes along the waterfront. Showcased here are Piano's architectural creations, like Il Bigo, a cylinder-shaped lift and Genoa landmark hanging from one of eight long arms resembling the masts of a ship and extending into the sky. It slowly climbs up to 40 metres, rotating on the way to offer 360-degree views over the old port, the rooftops and bell towers of the historical old town, Gulf of Genoa and nearby mountains. Other landmark buildings by Piano are the Aquarium of Genoa, built to resemble a shipping container, and the delicate-looking glass and steel Biosphere which seems to float on the water. Inside is a temperature-controlled tropical forest of over 150 plant and bird species. Look out for the turtles crawling through the undergrowth, scarlet ibises from South America, and a Moluccan cockatoo.

The opening of brand new boutique hotel Hotel De Ville in September has breathed new life into one of the city's heritage buildings. This palazzo facing the old port dates back to medieval times and was already home to a hotel in the 19th century. Its original marble staircase has been preserved while the 15 high-ceilinged and generously-sized guest rooms have been given a fresh contemporary vibe. Here modern furniture with clean lines combine with a neutral colour palette and vintage travel posters adding a cheery touch. Other good reasons to stay include the on-site bar and gourmet restaurant, while extra amenities include a cigar lounge, billiard room and reading nook.

Galata Museum of the Sea

Genoa's harbourfront is also home to the Galata Museum of the Sea. Here visitors can explore Genoa's maritime history, starting with the journey of Christopher Columbus, a Genoa native, to the new world. Cleverly-designed interactive exhibits are educative while entertaining for young and old: there's a life-size reproduction of a galley boat, a storm simulation room in 4D, a fascinating exhibition on the top floor tracing the history of Italian emigration, and docked outside is the Nazario Sauro submarine. Don't miss a climb up to the rooftop terrace of the museum for panoramic views of the old town's cityscape.

Adjoining the museum is the newly opened 518 Restaurant & Cafè, a popular place for apericena: the Italian trend of having an early evening meal of an aperitif accompanied by tapas-style snacks. There's a long list of cocktails to choose from and an apericena menu of snack foods like bruschette, cestino di patate (stuffed potato 'baskets') and pinzimonio con verdura (raw vegetable sticks) – all to be enjoyed from the first floor terrace overlooking the harbour.

A favourite with local diners and the holder of a Michelin star since 2010, The Cook opened in an exceptional new location in March. It now occupies the ground floor Sala Strozzi of Palazzo Branca Doria, a UNESCO-listed Rolli Palace (see below). Here diners sit surrounded by 17th century frescoes which completely cover the walls and ceilings while tucking into the creative creations cooked up by Chef Ivano Ricchebono. His innovative menu includes marinated bacalau in curry sauce, foie gras escalope cooked in white wine, marinated anchovies with black squid ink, smoked Swiss chard risotto with wine sauce and caramelised red onions, and pesto-stuffed ravioli dished up with green bean and pine nut sauce.

One of the city's recent hotspots is a once abandoned 1930s sports complex that's been entirely renovated – becoming in the process not only a popular place for recreation but also a culinary destination. Located just east of the city centre in the neighbourhood of Albaro, Arena Albaro Village has a large open-air swimming pool at its centre encircled by lively bars and eateries.

One of the newest openings in the complex is Muscoli by London restaurateur Roberto Costa, where mussels prepared in a variety of different ways dominate the menu. The outdoor patio made up of marble-topped tables and rattan chairs are a cosy place to spend an evening under the stars.

Arena Albaro Village is also a popular spot for a pre-dinner aperitif. Open since May, Mood Aperitivo is specialised in gin: there are 250 types to choose from in addition to an extensive menu of inventive cocktails. Also new on the Albaro nightlife scene is La Piazza 32 cocktail bar and tapas restaurant serving up appetising dishes of mostly seafood but also bite-sized crostini. In keeping with the open-air vibe of the complex, there's lots of outdoor seating made up of comfortable sofas and lanterns providing soft mood-lighting, creating the perfect setting for a nightcap.

Genoa's magnificent 16th century Renaissance and Baroque palaces of the Strada Nuova (renamed Via Garibaldi in 1882) are the opulent vestiges of the port city's wealth. Listed by UNESCO since 2006, these and other palaces in the historical centre are 42 properties collectively called the Rolli Palaces. 'Rolli' refers to the list of the wealthy owners of these luxurious residential palaces who were required by a 1576 decree of the Senate to receive and host distinguished visitors to the city. According to a precise classification system, each palace received a rank corresponding to its level of luxury, with the most luxurious reserved for the most important guests like kings, cardinals, ambassadors, and governors.

Inside are preserved interiors revealing ceilings covered in frescoes, enormous chandeliers and marble floors. Several of the palaces situated on the 250-metre-long Via Garibaldi are open to the public as museums, while others are only accessible twice a year on the bi-annual Rolli Days event.

Palazzo Rosso showcases a private collection of paintings with works by the Venetian, Genovese and Flemish schools: some of the most notable paintings are by Paolo Veronese, Giulio Cesare Procaccini, Guido Reni, Bernardo Strozzi, Albrecht Dürer and Anton Van Dyck. Also on display are many examples of period furniture and art works belonging to the Brignole-Sale family, a noble family that once lived between the palazzo's walls. Palazzo Bianco on the other side of the street houses a gallery dedicated to the Flemish masters and masterpieces by Hans Memling, Peter Paul Rubens, and Anton Van Dyck but also Caravaggio and others. A garden provides a passage to the neighbouring Palazzo Tursi which is notable for its pottery, tapestries and the violin once played by Paganini, Genoa's violin virtuoso.

The entire floor of one of these historical palaces has been transformed into a high-end lifestyle boutique, Via Garibaldi 12. Under extravagant sculpted ceilings painted with colourful frescoes bordered by ornate gilded frames, shoppers can browse the displays of luxury homeware brands like Hermès, Waterford and Wedgwood, contemporary furniture, and even coffee table books dedicated to art. “We are in a way a free museum,” says owner Lorenzo Bagnara. “By opening a shop here we wanted to combine commerce and culture. Lots of things are hidden in Genoa and this is a good example. You have to look behind the facade.”