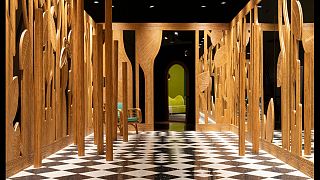 From September 14th to September 30th, Venice hosts Homo Faber, the first major cultural exhibition that celebrates European craftsmanship in the beautiful Fondazione Giorgio Cini on the San Giorgio Maggiore island. The building’s galleries, library, cloisters and even its 1960s-designed swimming pool hosts masterpieces, exhibitions, installations and workshops presenting the work of European artisans at the top of their game.

“Homo Faber (ie: human being capable of crafting things) is an expression that was first coined during the Renaissance, it captures and celebrates the infinite creativity of human beings”, explains Johann Rupert, co-founder of the Michelangelo Foundation – an international non-profit organization based in Geneva and set up to celebrate and preserve master craftsmanship around the world and strengthen its connection to design.

In his own words, Alberto Cavalli, executive director of the Michelangelo Foundation, told us more about this event he’s been putting together for over a year. “This is an exhibition not only dedicated to the promotion of the finest artisanal activities in Europe, but also to their protection”, he asserts.

“Some know-hows are certainly threatened”, he adds, “and we might risk losing incredibly precious talents. Many people think that the real enemy of the métier d'art is artificial intelligence and technology but they only constitute a challenge! The real enemy is homologation and ignorance. If you’re unable to detect the difference between something splendidly made by an artisan and something that has a history of horror behind it, then you're losing something…”.

At Homo Faber, futuristic technologies mingle with century-old know-hows. In fact, to show some of the world’s most singular talents, the Foundation created various virtual reality experiences that transport the spectator into these one of a kind workshops throughout Europe, from Portugal to Russia and from Iceland to Sicily.

To find these incredible artisans, the Michelangelo Foundation formed a team of world-renowned curators and experts to help them refine the best craftsmen around. Parisian interior designer India Mahdavi, Italian architect Michele de Lucchi and London-based professor of fashion Judith Clark are among the world-class names that collaborated with the non-profit to create the 16 exhibition spaces on the San Giorgi Maggiore island.

To do so, these designers and curators worked hand-in-hand with craftsmen, which is the core purpose of Homo Faber. “Very often designers and architects are looking for something special, something unique to integrate to their projects. But unfortunately, these incredible artisans are not so easy to be found”, explains Alberto Cavalli.

“They don't always have time to dedicate to communication. What we would like to present here is an incredibly rich platform of talents and know-how that could make the meeting between creativity and craftsmanship possible”, he hopes. Indeed, the executive director of the Michelangelo Foundation encouraged the designers that have imagined the exhibition spaces to work along local craftsmen.

India Mahdavi, an interior design superstar, brought her “Imaginary architecture” exhibition to life thanks to numerous artisans. She praises this “platform thanks to whom she met craftsmen” and thinks “Homo Faber did a great work finding the best artisans of Europe”. In her “Merry go round” pavilion – the abstraction of a boudoir that is out of scale, out of time and out of space – she described how “craftsmanship and know-how can bring to life an imaginary scenery”.

“I like working with the sensitivity of the hand, I like the unexpected”, she says, “when the might of the hand is combined with the might of the mind, magic is revealed”. The little imperfection the hand has to offer, the hazards you encounter with artisans, they’re all a part of it. I do use technology of course, but nothing has ever replaced a human hand”. In fact, she thinks “that the finish of a hand is always more moving.”

This emotion is certainly present throughout the whole exhibition, and with astounding diversity. A room full of vases is the perfect echo to a room filled with wooden artefacts or a swimming pool turned into a mannequin runway. The workshop of a saddle-maker is the ideal neighbour of a perfume atelier and so many other crafts, all brought together on this Venetian island, the perfect time and space for this journey throughout Europe which is truly about human collaboration and what is surviving in the past, the present and the future.

In Johann Rupert’s own words, “it’s humanity’s creativity, individuality, strong character and perspectives that truly endure over centuries and grow into heritage”. According to the co-founder of the Michelangelo Foundation, “today more than ever”, in these troubled times that we live in, “we are in great need of connection, both to our environment and to one another” – a mission Homo Faber has successfully accomplished.