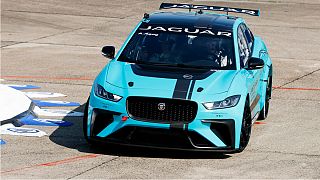 Shortly after Jaguar launched the production version of the I-Pace, Jaguar Racing presented its all-electric race car prototype to the world.

For the global debut, founder and CEO of Formula E Alejandro Agag drove the I-PACE eTROPHY race car around the iconic Tempelhof Circuit in Berlin to show what it is capable of. However, the real challenge is yet to be seen.

Up to 20 of these I-PACE eTROPHY race cars will ride later this year on the streets of global cities such as Hong Kong, Rome, Paris and New York on Jaguar's very own all-electric racing championship. "The 20 cars will have the same technology, so the drivers will be very important," said the Chairman of Jaguar Racing Gerd Mäuser.

The car itself "looks like a production road vehicle with the performance of a race car", summarized Mr Agag. "It is important about the eTROPHY to showcase that technology that you can drive on the road is absolutely capable on the racetrack as well," added the Team Director of Jaguar Racing James Barclay.

The Jaguar I-PACE eTROPHY will be the official support series for the Formula E Championship in 2018/19. The Jaguar I-PACE eTROPHY offers an ‘Arrive and Drive’ package for the drivers on the grid. All of the vehicles will be designed, engineered and built by Jaguar Land Rover Special Vehicle Operations (SVO). The package includes professional technical support from race car preparation to data engineering, global logistics for vehicles, spare parts and equipment.