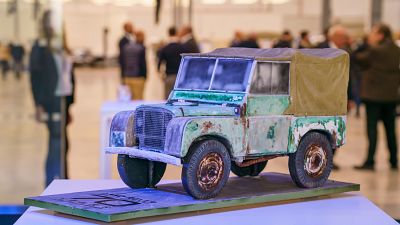 Seventy years ago two brothers stood on a Welsh beach and drew the shape of a car in the sand. This is how the story of Maurice and Spencer Wilks begins. They created the first Land Rover, the car that debuted on the world stage on 30 April at the 1948 Amsterdam Motor Show.

The launch vehicle went missing for the last 63 years before it was spotted in a garden two years ago. The company's experts in Coventry restored the famous vehicle in time to go on display in Whitley, UK, on 30 April, when Land Rover celebrated their 70th anniversary with a global broadcast.

In 1992, the company claimed that 70% of all the vehicles they had built were still in use. In the last 70 years, Land Rover went from a utility model at the end of World War II, to becoming the iconic 4x4, with more than 7 million models sold of the Defender, Discovery and Range Rover.

“Land Rover is so much more than just the most capable all-terrain vehicles. It connects people through a passion for adventure and for making more of our world. From our employees to customers and enthusiasts, this is a family that makes Land Rover special,” said Jaguar Land Rover CEO Prof Dr Ralf Speth.

Some of the milestones for Land Rover

1948 Land Rover Series I launched at the Amsterdam Motor Show

1956 The Oxford and Cambridge Far Eastern Expedition was completed by six Oxford & Cambridge University students, who drove from London to Singapore in two Land Rover Series I Station Wagons.