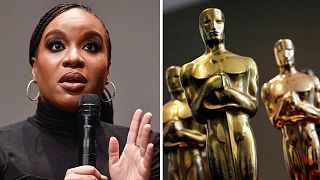 Writer-director Chinonye Chukwu, whose recent film Till was snubbed during yesterday’s Oscar nominations, has called out the Academy’s “unabashed misogyny towards Black women.”

“We live in a world and work in industries that are so aggressively committed to upholding whiteness and perpetuating an unabashed misogyny towards Black women,” Chukwu wrote on Instagram, a post which was accompanied by a picture of the director with civil rights activist Myrlie Evers-Williams.

“I am forever in gratitude for the greatest lesson of my life – regardless of any challenges or obstacles, I will always have the power to cultivate my own joy, and it is this joy that will continue to be one of my greatest forms of resistance,” Chukwu wrote.

Lead actress in Till Danielle Deadwyler missed out on a nomination many experts predicted she'd receive for her role as Mamie Till-Mobley in the film about her quest for justice in the wake of the murder of her 14-year-old son Emmett Till.

Till was tortured and lynched in Mississippi in 1955 after a white woman, Carolyn Bryant, said he had harassed her at a store. The young boy became an icon of the civil rights movement.

Chukwu has been outspoken about Till not showing violence against Black bodies and telling the story through Mamie Till-Mobley’s perspective.

“We were very careful in crafting the story to make sure that this story is told with dignity and respect. And so for those who are hesitant to see it, I understand in some cases why, but it’s very important to understand that if we forget our past, history will repeat itself. And when Emmett Till’s mother made the decision to have an open casket funeral, so that the world could see her son, it was a pivotal moment that galvanized the American civil rights movement.”

Whoopi Goldberg, who stars and serves as one of the producers of the film, shared her thoughts on US talk show The View:

“Before we start off, we just want to celebrate the talented artists and filmmakers who were nominated for Oscars this morning. Unfortunately, my film, Till, was not nominated, but we do want to congratulate all the nominees, because many of them have been here and it’s wonderful to say congrats, so that’s what we’ll do.”

A historic lack of diversity / a historic year for Asian nominees

The Oscars have been criticised for their lack of diversity in the past.

The lack of nominations for Black or minority actors in 2016 led to backlash, boycott and the #OscarsSoWhite movement. In response, the Academy doubled its female, Black and ethnic minority members.

This year, Angela Bassett is the only Black actress to be nominated for an Oscar, in the Best Supporting Actress category for her role in Marvel’s Black Panther: Wakanda Forever.

But it has been a historic year for Asian nominees.

The 2023 nominations have seen Everything Everywhere All At Once dominate the field. The film follows a Chinese-American family struggling to reconnect across the multiverse, a wonderfully inventive comedy which received 11 nominations in total - the most of any film this year.

The film features a majoritarily Asian cast and there has been a record number of Asian Oscar nominees this year.

This includes the highest number in the awards ceremony’s history for performance awards: nominations for Michelle Yeoh, Ke Huy Quan and Stephanie Hsu for Everything Everywhere All At Once, and Hong Chau receiving recognition for her role in The Whale.

The icnonic Michelle Yeoh, 60, earned her first Oscar nod and the special distinction of being the first actress to identify as Asian to get a Best Actress nomination.

The Malaysian-born actress told Deadline following the Oscar nomination news: "I think what it means to me is all those Asians out there go, 'You see, it's possible. If she can do it, I can freaking well do it as well.' That is the most important thing. I'm very ordinary. I just work very hard. There are so many brilliant actresses, actors out there who know that they have a seat at the table. All they have to do is find an opportunity and get there."

For those keeping track, actress of Asian descent Merle Oberon was nominated in 1936 for her role in The Dark Angel, but her ancestry was concealed: Oberon hid her mother’s South Asian and Maori heritage for the duration of her career.

Adding to the historic high of Asian nominees this year is Everything Everywhere All At Once co-director Daniel Kwan, who has become the third Asian filmmaker to be nominated for a hat-trick, with nominations for Best Picture, Best Director and Best Screenplay.

The other two Asian filmmakers nominated for hat-tricks have been Bong Joon-ho for 2019's Parasite and Chloé Zhao for 2020’s Nomadland.

The 95th Oscars ceremony will be held on 12 March.