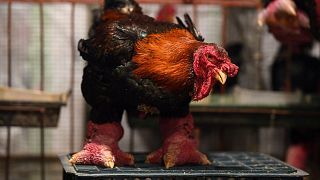 Le Van Hien, a farmer in northern Vietnam, carefully selects the finest bird from his flock of 2,000 "dragon chickens," a breed known for their thick legs that can fetch extraordinarily high prices.

The Dong Tao chicken, named after the commune where it is raised, is sought after for its lumpy legs, which are considered a delicacy and are particularly popular during the Vietnamese Lunar New Year, known as Tết. It is celebrated this year on Sunday 22 January.

Hien's four-kilogram bird, with legs that make up around a fifth of its body weight, sold for around €140. But larger and more elite chickens can sell for much more - up to €1,850 a head.

Why is the Dong Tao chicken so expensive to buy?

First of all, have you seen the size of their legs?

They can genuinely grow to be as thick as bricks, which obviously takes a lot of feed to bulk them up.

And what do these chickens eat, you ask?

They have a strict regimen of high-quality corn and rice.

The chickens, which were once bred exclusively to be served to the royal family and mandarins, are also given ample space to move and exercise, which contributes to their muscle development and overall taste.

"The more the chicken walks, the stronger and bigger their muscles are," says Hien, who has been breeding chickens for more than 15 years.

The meat of the Dong Tao chicken is prized for its tough and chewy texture, which is also low in fat and contains high levels of collagen, which according to Hien is "good for women's beauty".

Le Van Luan, who picked Hien's chicken meat as a year-end gift for his business partners and elderly relatives, is a regular customer in Dong Tao.

"The best part of the Dong Tao chicken is the skin of their legs. The bigger the legs are, the tastier," he says.

But these chickens aren't just valued for their taste but also for their beauty, and are sometimes entered into beauty contests. They also act as a status symbol and are considered as a luxury item.

Boiling, frying, stewing, and even grilling are all fair game.

Most commonly, Dong Tao chicken is prepared by boiling it and then serving it with a dipping sauce made from fish sauce, sugar, lime juice, and chilli.

Just as popular as boiling is the frying method, which is often served with a side of steamed rice.

The stewing method is also a traditional way of cooking the breed and it is often cooked with ginger, lemongrass, onion, and fish sauce.