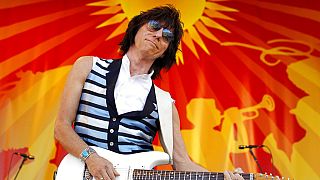 Jeff Beck, one of rock music's most influential guitarists has died at the age of 78.

In a statement released on Wednesday his representatives said he died on Tuesday after “suddenly contracting bacterial meningitis.”

Beck rose to fame in the 1960's with the Yardbirds and went on the form the Jeff Beck band with Ronnie Wood and Rod Stewart.

He became known as the guitar player's guitar player, a virtuoso who pushed the boundaries of blues, jazz and rock ‘n’ roll; influencing generations of shredders along the way. He was known for his improvising, love of harmonics and the whammy bar on his preferred guitar, the Fender Stratocaster.

“Jeff was such a nice person and an outstanding iconic, genius guitar player — there will never be another Jeff Beck,” Tony Iommi, guitarist for Black Sabbath wrote on Twitter among the many tributes.

Rolling Stone frontman Mick Jagger also took to Twitter to pay tribute: “With the death of Jeff Beck we have lost a wonderful man and one of the greatest guitar players in the world. We will all miss him so much.”

“Jeff Beck was on another planet. He took me and Ronnie Wood to the USA in the late 60s in his band the Jeff Beck Group and we haven’t looked back since. He was one of the few guitarists that when playing live would actually listen to me sing and respond,” tweeted Rod Stewart.

Beck was among the rock-guitarist pantheon from the late ’60s that included Eric Clapton, Jimmy Page and Jimi Hendrix.

He won eight Grammy Awards and was inducted into the Rock and Roll Hall of Fame twice - once with the Yardbirds in 1992 and again as a solo artist in 2009. He was ranked fifth in Rolling Stone magazine’s list of the “100 Greatest Guitarists of All Time.”