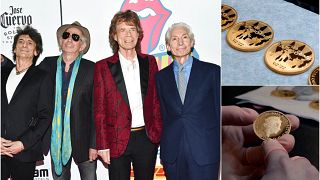 The Royal Mint has launched a new collectible coin celebrating the iconic British rock 'n' roll band The Rolling Stones. The new coin is the fifth in The Royal Mint’s “Music Legends” series. Other designs have honored music icons Queen, Elton John, David Bowie, and The Who.

Since forming in 1962, The Rolling Stones have wowed fans around the world with their timeless hits, classic albums, and iconic performances.

A legendary act with cross-generational appeal, The Rolling Stones are one of the biggest-selling acts in British music history and are hailed by some as the greatest rock 'n' roll band ever. Original drummer Charlie Watts died in 2021.

The band said, “We are delighted to be honored by way of an official UK coin. Even more significant that the release coincides with our 60th anniversary”.