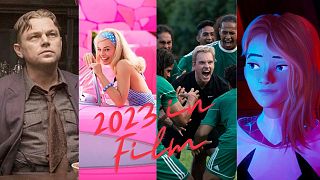 2023 in film - here are the films that should be on your watchlist   -  Copyright  Apple TV+, Warner Bros. Pictures, Searchlight Pictures, Sony Pictures Releasing, Euronews
By David Mouriquand  •  Updated: 03/01/2023

As our Cultural Advent Calendar can attest, 2022 was a banner year for movies.

The cinema industry is starting to rebuild some momentum after the existential crisis posed by the pandemic. While there weren’t as many films released last year compared to pre-COVID numbers, and the sad fact remains that time for rejoicing isn’t quite now - the pandemic woes led to Cineworld filing for bankruptcy last year, as well as the closure of the Edinburgh Film Festival (EIFF) - there’s still some solace to be found in this year’s release slate.

2023 is set to be a continuing year of recovery, with an eclectic schedule chockablock full of blockbusters and arthouse fare that should hopefully bump up ticket sales.

Here is a rundown of our most anticipated films of 2023.

Brandon Cronenberg's third feature, following up his fantastic 2020 bodyhorror thriller Possessor, is a sci-fi thriller which follows a wealthy couple on vacation at an island resort. A fatal accident, which will expose a dark subculture of hedonistic tourism, leaves them facing a zero-tolerance policy for crime: either be executed or, if you’re rich enough, create a double of yourself whose death you can watch.

Starring Alexander Skarsgård, Cleopatra Coleman and Mia Goth, this looks like a disturbing and trippy ride. Going by first trailer alone, this twisted offering from Cronenberg Jr. looks set to haunt your nightmares for months to come.

Infinity Pool premieres on 22 January at the 2023 Sundance Film Festival, followed by its European premiere at the Berlin Film Festival in February.

Yes, the start of this year is going to be horror-heavy. And that’s no bad thing.

Even if last year’s fifth instalment anchored itself within the tiresome trend of sharing the exact same name as the original film – see: 2010’s A Nightmare on Elm Street, 2011’s The Thing, 2018’s Halloween – it was a pretty solid and well-crafted chapter.

We’re already getting a sixth helping of Ghostface this year with Scream VI, which strays from the series' formula by shifting the action from California to New York City.

Matt Bettinelli-Olpin and Tyler Gillett return to direct and have brought with them 2022 Scream writers James Vanderbilt and Guy Busick. The only one not returning is Neve Campbell, who opted not to reprise the role of legacy character Sidney due to salary disputes. Let’s hope that wasn’t an early red flag…

Directed by Greta Gerwig (Lady Bird, Little Women) and starring Margot Robbie as the iconic doll and Ryan Gosling as her slick beau Ken, Barbie is gearing up to be the eye-catching, kitsch and playfully subversive live-action version of the ubiquitous Mattel doll no one could have expected.

While there’s no way of saying exactly what the Barbie movie will be about, we do know that Will Ferrell will play the CEO of Mattel, that some members of the massive ensemble cast - featuring Simu Liu (Shang-Chi and the Legend of the Ten Rings), Kate McKinnon (Saturday Night Live), Kingsley Ben-Adir (One Night in Miami), Issa Rae (The Hate U Give), America Ferrera (Ulgy Betty) and Emma Mackey (Emily) - will be playing other versions of Barbie and Ken, and that the plot may centre around Barbie’s life once she escapes Barbieland and heads into the real world.

A go-for-broke, self-aware and colourfully campy comedy with echoes of The Lego Movie and Enchanted?

When can we inject this into our eyeballs with haste? On 21 July, that's when. The same date as the next entry…

Christopher Nolan’s last film, Tenet, was a conceptually-intricate noodlebaker that bought a little too hard into how clever it was. It remains one of his most disappointing films, one which saw the British director disappear up his own backside.

Here to hopefully remedy that is not another time-bending actioner but a more straightforward biopic about the advent of the nuclear age, following the titular theoretical physicist (Cillian Murphy) and his role in the Manhattan Project.

Oppenheimer's first trailer suggests a bombastic ride, filled with retina-assaulting visuals (Nolan has said that he recreated an atom bomb explosion without CGI for his ambitious historical drama), and complete with one hell of an ensemble cast, including Florence Pugh, Emily Blunt, Robert Downey Jr., Matt Damon and Kenneth Branagh.

Could this be the one that finally wins Nolan an Oscar?

Oppenheimer faces off against Barbie on 21 July.

Yes, that title is funny, but please stop snickering at the back.

After her brilliant Shiva Baby debut, director Emma Seligman reteams with Rachel Sennott for a high school queer sex comedy about two high school seniors who set up a “fight club” to hook up with cheerleaders before graduation.

Considering the impressive tonal balancing act Seligman managed to strike in Shiva Baby, in which deadpan comedy, cringe humour and anxiety triggering claustrophobia had equal say, Bottoms could be the under-the-radar gem that needs to top your 2023 watchlist.

No release date so far, but keep your eyes peeled. And your bottoms clenched.

Yorgos Lanthimos' new film is based on Alasdair Gray's 1992 novel of the same name. It sees the Greek director team up once more with The Favourite ’s scribe Tony McNamara and its lead star Emma Stone to tell the story of Emma Baxter (Stone), a woman who is brought back from the dead via the brain of her unborn child, after she drowns herself to escape her abusive husband.

Sound like a bonkers feminist riff on 'Frankenstein'? Good – that’s the way Lanthimos likes it. And what do you expect from the mind behind The Lobster and The Killing of a Sacred Deer? He’s not put a foot wrong so far and you can expect this year’s offering to be one of the weirdest and most talked about films of 2023.

Poor Things has no fixed release date so far, but don’t be surprised if it premieres in Venice, just in time for awards season.

Lynne Ramsay’s new film is the adaptation of the short story by 'The Handmaid’s Tale' scribe Margaret Atwood.

Stone Mattress is a revenge thriller set on a cruise ship in the Arctic, starring Julianne Moore as a retired physiotherapist who is seduced by a seemingly pleasant man in his mid-sixties who inherited a family business. Still, his presence unsettles her and reopens some wounds from her past. Then comes a shocking act that’ll turn the cruise upside down.

So, just so we’re clear:

The fact that there’s no release date as of yet is pure torture.

Spider-Man: Across The Spider-Verse

The much-anticipated sequel, Across the Spider-Verse, will see Miles Morales (Shameik Moore) and Gwen Stacy (Hailee Steinfeld) clash with the villainous Spot (Jason Schwartzman), a man whose body is covered with interdimensional portals.

While the multiverse trend is just plain exhausting at this point, don’t bet against Spider-Man: Across The Spider-Verse, especially when considering the imagination and ambition on show in the first instalment. Plus, the first trailer promises a lot: visual flare, energy to spare, some weighty emotional stakes.

Spider-Man: Across the Spider-Verse swings into cinemas on 2 June.

It’s been nearly three years since David Fincher released his last film, Mank, and he has been missed. Thankfully, the director is re-teaming with Netflix for an adaptation of Alexis Nolent's acclaimed 1998 graphic novel series 'The Killer'. His upcoming film stars Michael Fassbender as an assassin who begins to psychologically crack as he develops a conscience.

Considering Michael Fassbender has been away from the screens since 2019’s X-Men: Dark Phoenix and that Fincher has roped in Se7en screenwriter Andrew Kevin Walker, there’s every reason to get very excited about The Killer.

The Killer releases on Netflix sometime this year, probably for awards season in the fall. And speaking of Michael Fassbender…

It’s going to be a busy year for the Fass…

Taika Waititi's upcoming underdog comedy is based on a true story and the 2014 doc of the same name, and centers around Dutch-American football coach Thomas Rongen (Fassbender) and his attempts to salvage the American Samoa national team, considered the worst football team in the world.

Delayed for a couple of years due to the pandemic, this should hopefully renew our faith in Waititi, following last year’s abysmal Thor: Love & Thunder, which lost the Kiwi director a lot of goodwill. And considering it has been pushed back from its original April release to September, this means that there’s some hope that it could be a potential awards contender.

Next Goal Wins drops on 22 September.

Denis Villeneuve (Arrival, Blade Runner 2049) showed once again with 2021’s Dune: Part One that he specialises in delivering on the seemingly impossible. Adapting Frank Herbert’s famously sprawling (some might say tortuously impenetrable) epic sci-fi novel ‘Dune’ was his most ambitious undertaking to date – especially when considering the space saga previously defeated Alejandro Jodorowsky and made David Lynch a very unhappy camper in 1984, labelling his effort “a total failure”.

Dune: Part One was a triumph, a visual and immersive masterstroke that had fans aching for the sequel when the closing line “This is only the beginning” dropped. This year, Duneheads get their wish, with the conclusion to the story.

Though the second half of Herbert's novel is notoriously tough to translate to the big screen, there’s really no reason to doubt Villeneuve. Plus, with Florence Pugh, Austin Butler, Léa Seydoux, and Christopher Walken joining the original cast, Part Two can’t come soon enough. ETA: 3 November.

Killers Of The Flower Moon

Martin Scorsese's follow-up to The Irishman is an adaptation of David Grann's epic 2017 book 'Killers of the Flower Moon', centered around a series of murders of Native Americans on tribal land in 1920s Oklahoma.

The $200 million dollar-costing crime drama (Apple TV+ is footing the bill) features Scorsese regulars Leonard DiCaprio and Robert De Niro, as well as Lily Gladstone, Brendan Fraser and John Lithgow. And if you’re in a betting mood, not a soul would be surprised if this wasn’t already the Best Picture Oscar frontrunner for the 2024 ceremony.

If rumours are to be believed, Scorsese is prepping Killers of the Flower Moon for a Cannes premiere.

As if those weren’t enough, here are some other 2023 films to look out for:

Get noting those names and dates, and you can be sure that we here at Euronews Culture will be bringing you further coverage of the very best 2023 has to offer in cinema.