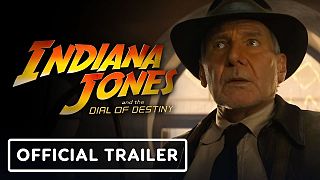 The new Indiana Jones trailer has finally dropped and with it, the long-awaited title of the fifth instalment: Indiana Jones and the Dial of Destiny.

The film, which hits theatres on 30 June 2023, will see Harrison Ford, 80, take up the iconic brown Fedora and whip one final time as the intrepid adventurer.

He is paired with Fleebag creator Phoebe Waller-Bridge, who plays Indy’s goddaughter Helena, as the two face off against Voller (Mads Mikkelsen), an ex-Nazi working at NASA on the moon-landing programme. Rounding off the cast are Toby Jones, Antonio Banderas, Shaunette Renée Wilson and the returning John Rhys-Davies, who reprises his role as Sallah from the previous films.

This fifth adventure will be directed by James Langold (Walk The Line, Logan) and marks the first time that Steven Spielberg will not be directing an installment - even if he serves as a producer. It’s also a momentous occasion, as Indiana Jones and the Dial of Destiny will not only be Ford’s last hurrah but also the last time that legendary composer John Williams, 90, is on scoring duties.

While the trailer seems to have been well received on the whole, there are concerns looming over this fifth adventure.

The next adventure has a lot to make up for.

There are also growing fears regarding the project, as it will feature segments with a de-aged Harrison Ford in numerous scenes, as the plot – unsurprisingly considering the title – will reportedly feature some time travel.

The whole de-aging malarkey has not worked so well in the past, with Patrick Stewart looking eerily airbrushed in X-Men: The Last Stand, Jeff Bridges ending up as an aging ken doll in Tron: Legacy, and the stronger effects in Martin Scorsese’s The Irishman still not making up for the fact that Robert De Niro, Al Pacino and Joe Pesci still moved like older men.

After all, "It's not the years, honey, it's the mileage."

Even Marvel and Disney haven’t managed to convincingly pull it off, with the de-aged Robert Downey Jr. in Captain America: Civil War being a letdown, and there are laws against whatever they did to the faces of the late Peter Cushing and the much-missed Carrie Fisher in Rogue One – although those last two were virtual actors (body doubles caked in CGI), so they may get a pass.

However, the main issue surrounding Indiana Jones and the Dial of Destiny are the rumours regarding Disney’s recent test-screenings, which apparently have been disastrous.

It has been reported on several platforms and outlets - the less-than-reliable 4chan but the very reliable World of Reel and Cosmicbook - that a handful of different endings (a rumoured six) have been tested and audiences booed all of them.

One ending had Indiana Jones dying, which didn’t go down well. Another, which was said to be the least popular one, had Phoebe Waller-Bridge replacing Harrison Ford at the end of the movie – presumably to set up a new franchise without the leading man.

"Nope. Haven't been any screenings at all."

Fair enough, coming from the mouth of the director, but this has been countered by comments made by industry sources.

There have also been (so far unsubstantiated) reports that Disney is demanding that the movie go through reshoots due to how bad the end result is. This has led many a fan to state the bleeding obvious – that continuing the franchise beyond the original three films was a terrible idea in the first place – and to panic that Disney might ruin the franchise like they did with the last Star Wars trilogy.

So, should we be crucifying the film before its release and believing all rumours?

Probably. A narrative centered around a time-travelling MacGuffin sounds awful.

Will the last worthy Indy movie stay in the ‘80s?

Quite likely, but safest to reserve judgement until the film is released next summer.

And finally, will audiences flock to see the film when it comes out, bringing it “fortune and glory” or will it be “no ticket”?