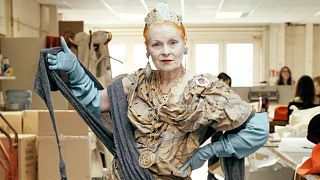 The former primary school teacher was one of the most brilliant fashion designers of all time, a rebel with a flare of the theatrical, who injected her love for anarchy, fun, sex and the avant-garde into her iconoclastic designs.

She pushed the boundaries when it came to colour and print, and shaped the UK punk movement and street style in the 70s, earning her the title 'The Queen of Punk'.

Her frequently subversive and always cutting-edge designs were worn by actors, activists, musicians and artists across genres and gender.

She experienced something of a resurgence in the last few years, as a new generation of celebrities like Harry Styles, Dua Lipa, Zendaya and Timothée Chalamet could be seen on red carpets and awards shows draped in Westwood’s memorable threads.

From tartan chic, kilts, rips and safety pins to some flamboyant androgynous looks, she leaves a legacy like no other.

Here are some of Westwood’s most iconic looks:

Vivienne Westwood met Malcolm McLaren in the early 70s. His shop on Kings Road in London – which became the famed boutique SEX – was punk legend. She created the Sex Pistols’ iconic looks – from the pins to the straightjackets and the God Save The Queen shirts – and designed clothes for future Pretenders frontwoman Chrissie Hynde.

Showing up to receive an OBE from Queen Elizabeth in 1992 and bypassing all the strict style protocols by wearing a grey suit with no underwear.

Her bridal looks were the hit of the runways in the mid-90s. Here with French model Laetitia Casta at the Paris Fashion Week Fall / Winter 1996.

Emma Thompson wearing a brown strapless Westwood design - and is accompanied by a pig, London in 2010.

Westwood actively supported climate causes and championed human rights throughout her life, including giving a shout out to the Just Stop Oil activists this year. She is here seen at a protest outside the Russian Embassy in London in support of the 30 Greenpeace activists charged with piracy at a Russian oil platform – October 2013.

Pharrell Williams sporting the viral hat sensation designed by Westwood at the 2014 Grammy Awards. The Buffalo Hat was from Westwood’s Fall / Winter 1983 show.

Zendaya at the 2015 Academy Awards wearing a custom bridal dress by Westwood.

Doja Cat at the 2020 American Music Awards, wearing a Victorian-inspired outfit by Westwood.

Dua Lipa at the 2021 Brit Awards, wearing a Union Jack trench from Westwood.

Timothée Chalamet with a Westwood design at the premiere of this year’s Bones And All.

Harry Styles on the cover of Rolling Stone this year, wearing some signature plumage courtesy of Westwood.