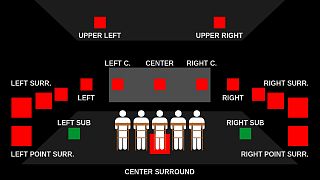 29 December 1982: Surround Sound is introduced for home use by Dolby.

The history of surround sound in the home environment can be traced back to the first two-channel stereo music recordings and stereo consumer audio equipment of the late 1950s. By the early 1960s, the stereo format was the industry standard.

A decade later, multiple companies attempted to recreate the four-channel quadraphonic sound of Dolby Stereo within the home environment. None ultimately succeeded in the marketplace, as they were deemed too complicated and expensive.

True surround sound came into the home setting on this day in 1982, with the introduction of Dolby Surround technology. Consisting of three channels (a left channel, a right channel, and a surround channel - see above), Dolby Surround could recreate the cinematic soundtracks of Dolby Stereo right in your living room for maximum immersion.

From ‘As Tears Go By’ to ‘Strange Weather’, via ‘Come And Stay With Me’ and ‘Boulevard of Broken Dreams’, her songs have chronicled her rise to celebrity, drug addiction, her fall from grace and her reinvention as a soulful singer subverting all expectations for an aging woman in the male-dominated music industry.

Today would be the ideal day to rediscover some of her discography, including one underappreciated masterpiece she released in 2005: ‘Before the Poison’.

Written to mirror the fatalistic mood of a post-9/11 world, this album immerses the listener in a dark and desolate atmosphere that is punctuated by moments of sheer beauty. Faithful enlisted the talents of PJ Harvey, Nick Cave and Damon Albarn, and the 10-track release deserves reappraisal.

Even the most casual of Star Trek fan has heard of the Tribbles.

They were introduced in the fifteenth episode of the show’s second season titled, “The Trouble with Tribbles” which aired on this day in 1967.

The starship Enterprise became overly crowded by cute yet rapidly-reproducing critters called “tribbles” in this comedic episode, which saw William Shatner's Captain Kirk covered with them in several scenes.

Not a bad way to spend a day on set.

The tribbles were individually sewn by Jacqueline Cumeré, who was reportedly paid $350 to sew five hundred tribbles from synthetic fur and stuff them with foam rubber. Six ambulatory tribbles were made using the mechanisms of walking toy dogs, while the other tribbles were created out of beanbags.

The things done in the name of good television...