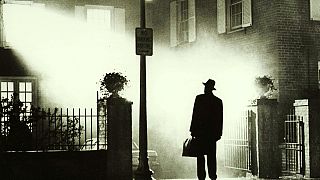 26 December 1973: The greatest horror film was released in theatres today. The power of Christ compels you on Boxing Day!!

The book recounted the supposedly true events of a catholic priest’s attempts to exorcise a possessed American teenage boy named Roland Doe in the late 1940s. The novel changed several details, such as the gender of the possessed child.

The production of the film was believed to be cursed, from unfortunate events such as a fire on the set to the deaths of actors involved in the film, such as Jack MacGowran and Vasiliki Maliaros, who died while the film was in post-production.

On its premiere, The Exorcist proved to be a massive box-office success, terrifying audiences like they had never been before.

Indeed, part of The Exorcist's legacy is the controversy it created when released. Infamously subject to protests, censorship, and even being banned from screening in certain areas, the “scariest movie of all time” provoked a hysteria that still had crowds gathering for a good fright.

It did prove to be too much for some viewers to take, with reports of fainting and vomiting in the aisles. The thing is that it wasn’t the head-spinning, spider-walk or crucifix (if you know, you know) scenes that caused people to faint, but a scene when young Regan gets a realistic-looking angiography. The sequence went on to receive praise from medical professionals, who described it as a realistic depiction of the procedure. This opinion was not shared by British comedian Graeme Garden, who has a medical degree, and said that the scene was "genuinely disturbing" in his review for the New Scientist - he called it "the really irresponsible feature of this film".

Regardless of the accusations of heresy, alleged subliminal imagery and the aforementioned medical scene, the film became the first horror film to be nominated for an Academy Award – it earned 10 Oscar nominations, including Best Picture, and won two at the 1974 Oscars: Best Adapted Screenplay and Best Sound Mixing – and nearly half a century since its release, The Exorcist remains one of the greatest horror films ever made.

And considering it turns 50 next year, you can expect Euronews Culture to be all over this like the demon Pazuzu on a vulnerable soul. Be warned.

"What's the news?" The start of Kwanzaa

Each year it is celebrated from 26 December to 1 January. Each day, observers greet each other with “Habri Gani”, which means “What’s the news?”

Kwanzaa was founded by Black nationalist Ron Karenga in 1966. The name is derived from the Swahili phrase, “matunda ya kwanza” which means “first fruits.” The celebration was established as a means to help people reconnect with their African culture and heritage.

During Kwanzaa, people decorate their houses with colorful art (the colours of Kwanzaa are black, red and green) and African cloth. Fresh fruits are put out on tables as centerpieces to represent African idealism. The celebration also includes candle lighting rituals, music and Zawadi (gifts) such as books and heritage symbols given to the children.

Speaking of candles and colours, Kwanzaa is observed by using kinara, a Swahili word that means candle holder. Seven candles are placed in the kinara: three red (on the left), three green (on the right), and a single black candle that’s placed in the center. The candles are called the Mishumaa, which means seven candles. Here's the breakdown:

The three red candles are Umoja (Unity) on 26/12, Kujichagulia (self-determination) on 27/12, and Ujima (collective work and responsibility) on 28/12.

The central black candle is Ujaama (cooperative economics) on 29/12.