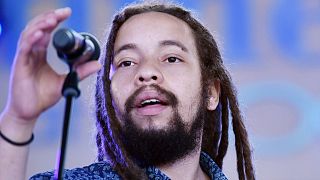 Joseph ‘Jo Mersa’ Marley, the grandson of famed Reggae musician Bob Marley and eldest son of eight-time Grammy-winner Stephen Marley, has died at the age of 31.

Jo, who was also a reggae musician and DJ – known professionally as Jo Mersa – was found unresponsive in a vehicle on Tuesday 27 December and reportedly died of an asthma attack.

The singer behind the 2016 hit single 'Burn It Down' was born in Kingston on 12 March 1991, and spent much of his early life in Jamaica. Subsequently, he moved to Florida to attend high school. He later attended Miami Dade College to study studio engineering.

Joseph made his official musical debut in 2010 with 'My Girl,' a collaboration with his older cousin Daniel Bambaata Marley, released on the Marley family’s imprint record label Ghetto Youths International and produced by his father. This was followed by his debut EP, 'Comfortable', in 2014 and his second EP, 'Eternal', released last year.

Jamaica's Prime Minister, Andrew Holness, paid tribute to Jo Mersa following his death, calling it "a huge loss to the music as we look to the next generation."

"My heartfelt sympathies to Joseph's friends and associates and to the Reggae music fraternity and fans everywhere," he added.

"May he find Eternal Peace as we mourn his loss during this season of goodwill when we celebrate with family and friends our love for each other."

Jo Mersa had recently opened up about his grandfather, who died in 1981 at the age of 36, telling Reggaeville.com: "We always hear those reflections, speaking about those things, about the role that he played not only as family member and father, but also in the world and the impact he had on the Reggae community and the Reggae culture, the roots, bringing forward the message of Rastafari and love, over all love."

His grandfather Bob Marley was a major contributor to the popularization of Reggae music. Some of his hits included 'Everything's Gonna Be Alright', 'Get Up, Stand Up' and 'Is This Love'.

Jo Mersa is survived by his wife, daughter and sister Mystic Marley, who is also a musician.