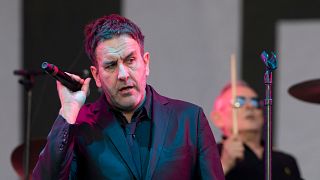 Terry Hall, the lead singer of The Specials, has died at 63 following a brief illness, the band has announced.

The singer-songwriter rose to fame as part of the band, who were pioneers of the ska scene and outspokenly political pop in the UK. The multi-racial group provided a musical backdrop to the turbulent Thatcher years, economic recession, urban decay and societal fracture in the early 1980s.

During their time together, The Specials produced a string of hit records including ‘A Message To You, Rudy’, ‘Rat Race’, 'Too Much Too Young' and ‘Ghost Town’.

In February 2019, The Specials released ‘Encore’, their first album of new material in 37 years.

A statement released the band's official Twitter account said: "It is with great sadness that we announce the passing, following a brief illness, of Terry, our beautiful friend, brother and one of the most brilliant singers, songwriters and lyricists this country has ever produced.”

The statement went on to say that "Terry was a wonderful husband and father and one of the kindest, funniest, and most genuine of souls. His music and his performances encapsulated the very essence of life ... the joy, the pain, the humour, the fight for justice, but mostly the love. He will be deeply missed by all who knew and loved him and leaves behind the gift of his remarkable music and profound humanity. Terry often left the stage at the end of The Specials' life-affirming shows with three words... 'Love Love Love'.”

After learning of Hall’s death, countless artists have paid tribute to the late musician, including Elvis Costello, Billy Bragg, and the Go-Go’s Jane Wiedlin.

Finding solace and strength in music

Born Terence Edward Hall on 19 March 1959 in Coventry, England, he had a troubling childhood growing up.

When he was 12, Hall was abducted by a teacher and brought to France for a pedophile ring.

“(I was) sexually abused for four days, and then punched in the face and left on the roadside,” he told The Spectator in 2019.

The traumatic experience meant that Hall suffered from manic depression and medicated heavily to deal with the effects. Before his 15th birthday, he left school and started to pursue music.

The Specials were formed in Coventry in 1977, by Jerry Dammers, Lynval Golding and Horace Panter - with Hall, Neville Staple, Roddy Byers and John Bradbury joining a year later.

Hall recorded two albums with the band during their initial run: the 1979 debut 'The Specials' and their 1980 sophomore LP 'More Specials', both of which would go on to become instant classics for the evolving image of ska as a politically and socially conscious genre.

Early singles like 'Gangsters' and 'A Message to You Rudy' became hits, as did 1980 singles 'Do Nothing' and 'Stereotype.' It was their 1981 single 'Ghost Town,' though, that became the soundtrack to the 1981 England riots between young Black people and the police in response to racial discrimination.

That year, 'Ghost Town' held the No. 1 spot on the radio charts for three weeks and stayed in the Top 40 for 10 weeks.

Hall then left the band to start Fun Boy Three, his new wave project with Specials bandmates Lynval Golding and Neville Staple. They released their self-titled debut LP in 1982 and followed it up with 'Waiting' the following year before disbanding.

In 1984, Hall formed another band titled the Colourfield, which released two albums: 1985’s 'Virgins and Philistines' and 1987’s 'Deception.' Additionally, Hall joined the bands Vegas and Terry, Blair & Anouchka, and released two solo albums. He would also go on to co-write the Go-Go’s 'Our Lips Are Sealed' and collaborate with a wide range of artists, including Sinéad O’Connor, Gorillaz, Tricky, M.I.A. and Lily Allen.

'Encore' hit the No. 1 spot on the UK Albums Chart, making it the highest-charting album ever released by the band.

Covid put their comeback to an unexpected halt and Hall decided to record an album of covers, inspired by the Black Lives Matter movement. Released in October 2021, 'Protest Songs' featured new versions of Bob Marley's 'Get Up, Stand Up' and The Staples Singers' 'Freedom Highway'.

Hall is survived by his wife, the director Lindy Heymann. They had one son, while Hall has two older sons with his ex-wife, Jeanette Hall.