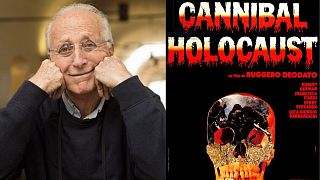 Ruggero Deodato, the Italian screenwriter and director of the most controversial film in cinema history - Cannibal Holocaust - has died at the age of 83.

He leaves behind a varied filmography that includes thrillers (Concorde Affaire '79), peplums (The Barbarians) and melodramas (Last Feelings), but he was best known for his gory contributions to the horror genre, including the giallos Body Count and Phantom of Death.

However, the film he will be remembered most for directing is the infamous 1980 found footage cannibal horror film Cannibal Holocaust, which managed to shock the world like no other film in cinema history and earned him the moniker “Monsieur Cannibal” in France.

Deodato started out as an extra, but after failing an audition for a Federico Fellini film, he gave up his acting career to take up directing.

From 1959 to 1968, he worked on nearly 30 films, including several by Sergio Corbucci and Antonio Margheriti.

His first attempt at horror was Jungle Holocaust in 1977, before releasing the film that shocked an entire generation: Cannibal Holocaust.

It follows the story of a film crew that sets out to contact the tribes of the Amazon rainforest. It doesn't end well.

Deodato was inspired by media coverage of the Italian terrorist organization Red Brigades, which engaged in murders, kidnappings, and tortures.

Dubbed “the most controversial film ever made”, the film revolutionized the found-footage genre, and its extremely realistic scenes of violence and gore caused Deodato’s arrest. He was taken to trial in Italy and accused of murdering his cast.

He proved his innocence by summoning the cast and testifying how his gruesome effects were accomplished.

The film was banned or heavily censored in around 40 countries - including the US, UK, Australia, New Zealand, Norway and Finland.

To this day, it remains one of the most shocking and brutal films ever made, and is considered the precursor to found footage films like The Blair Witch Project, Lake Mungo, Cloverfield and REC. And while the snuff movie accusations were disproven, it still remains widely criticized for several scenes of un-simulated animal cruelty.

“I make films that people call ‘horror’ because I want to make films about real things that happen in the world," once said Deodato. "And most real things aren't very nice."