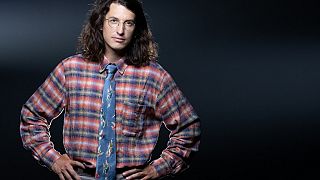 Content warning: Some readers may find details within this story disturbing.

French illustrator Bastien Vivès and two of his publishers under investigation for promoting incest and child pornography. Charges had been pressed against them last month by a child protection organisation.

The 38-year-old French graphic novel illustrator has been mired in controversy in December, when his guest of honour billing was announced at the Angoulême International Comics Festival in January 2023 - Europe’s second-largest festival of its kind.

Child protection organisations and feminists called on the organisers to cancel his appearance, alleging that his graphic novels are not just art and fiction - they also promote incest and child pornography.

Since a 2021 law, it is illegal in France to publish images representing a minor in a pornographic way.

Why is Vivès’ work controversial?

In 2011's Les Melons de la Colère, a young farmer ends up performing oral sex on her younger brother, who’s a minor, after discovering the child has an unusually large penis.

A few years later in Le Petit Paul, Vivès revives the adventures of the young farmer-boy, who is now described as being 10 years old. In the 2018 graphic novel, the child gets sexual attention from older women because of the size of his genitals.

The same year, Vivès published La Décharge Mentale in which 10, 15 and 18-year-old girls are pictured having sex with their parents and a male friend of the couple.

Why is he being criticised now?

It's not the first time Bastien Vivès’ work has been criticised. In 2018 some stores decided to stop selling Le Petit Paul following an online petition.

The planned celebration of his writings at the 2023 Angoulême International Comics Festival has been the last straw for many feminists and child protection organisations. According to them, having such a disputed figure as guest of honour is a slap in the face for victims of incest and paedophilia.

Among them are Emma, a French feminist cartoonist who became famous for her strip on the ‘mental load’. She publicly called out Vivès and the cartoon festival’s board.

In a Twitter post, she denounced Vivès for his harsh criticism of her feminist work. Vivès is seen commenting on a Facebook post in which he wishes her death, as well as for Emma’s child to get anally raped each time her internet posts are liked.

Emma also shows screenshots of Vivès’ comments on an online site, in which he says: ‘Sometimes I feel attracted by 10 or 12 year old girls… I’ve thought‘ Shit, I am a paedophile’. But I don’t know, there’s something to it… Of course, I don’t do anything. But it’s a human feeling that anyone can have ’.

Is it part of a bigger problem in France?

Since the #MeToo movement, many high-profile cases linked to incest or child pornography have shocked people in and out of the country. Some say consent and paedophilia has problematic roots in French culture, especially when it comes to artists.

French-Polish film director Roman Polanski has lived and worked in France for decades, in spite of being convicted of drugging and raping a 13-year-old girl in the US in 1977. He never faced consequences for actions he admitted to but claimed were consensual. He fled to France in 1978, and French authorities never surrendered him.

In fact, Polanski has continued to work, and is regularly honoured in the country that has welcomed him since his flight. In 2020, he received France's Best Director prize during the Cesar Awards ceremony - the equivalent of the countery's Oscars. French actress Adele Haenel, who had recently spoken up about sexual abuse in the French cinema industry, stormed out of the room, shouting ‘It's a disgrace!’. Polanski supporters, including actor Jean Dujardin who starred in his movie An Officer and a Spy (J'Accuse), said the public should mark the difference between the man and the artist.

That same year, another French artist, Gabriel Matzneff, was in the spotlight following an investigation launched against him for statutory rape. One of his alleged victims, Vanessa Springora, had just published a book in which she accused the writer of having abused her in the 1980’s, when she was 13 years old.

The writer had never hidden his attraction for young boys and girls during live interviews, and had thoroughly described in his books several affairs he had had with minors. Although this had been public knowledge for decades, authorities only took action after Springora’s book attracted attention.

The case was dismissed a year later due to a judicial irregularity.

These cases - and many more - have shaken public opinion, and pushed politicians to take act.

A 2021 law set the age of consent to 15 years old, meaning no relationship between an adult and a child aged 15 or younger can be considered consensual. It has been set at 18 years old in the case of incest.

Since 2021, it is now also illegal in France to publish images representing a minor in a pornographic way - hence the allegations against Vivès.

How has Vivès and the comics festival responded?

Over the years, Vivès and his publishers’ defence focused on the burlesque tone of his comics, and the creative freedom of drawing forbidden fantasies.

Arnaud Gallais, a member of Ciivise, an independent commission on incest and sexual violence towards children, launched a petition calling on the Angoulême International Comics Festival to cancel Vivès’ appearance. The decision to remove him from the billing only came a week ago.

In a press statement, the festival’s board recognised there exists a 'sensitivity' when it comes to defending women and children. But the board insisted Vivès was cancelled for his own security, as threats had been made against him. It also said his work was protected by freedom of expression.

Bastien Vivès and his publishers have yet to react to the investigation launched against them. However, following his removal from the cartoon festival, Vivès said in an Instagram post that he condemns paedophilia, rape culture and violence towards women. He also apologised for his comments about his fellow cartoonist Emma.

116 111 is the number specially reserved for child helplines in Europe. Child helplines are free and confidential services for children and young people, where they can talk via phone, chat and other methods of communication.