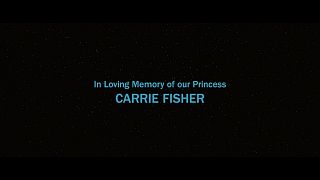 Fisher suffered a heart attack during a transatlantic flight on 23 December and eventually passed away on 27 December 2016.

The next day, her mother, Debbie Reynolds, had what appeared to be a massive stroke, and later that day she was pronounced dead. Many say that this was an example of someone dying from a broken heart.

And we’re not sure about you, but the words of her Star Wars co-star Mark Hamill still ring true:

Fisher left behind an unforgettable legacy both onscreen and behind-the-scenes - and while she is known around the world for her acting, what many may have missed is that she was also a phenomenal writer.

Fisher released her first book ‘Postcards from the Edge’ back in 1987, which became a New York Times Best Seller. Fisher wrote a total of eight books, including four non-fiction books – the last being her 2016 memoir ‘The Princess Diarist’.

She was also a highly sought-after script doctor and worked on scripts including the Star Wars prequel films, Hook, The Wedding Singer, Sister Act, Coyote Ugly, and Young Indiana Jones.

If there’s one of her books you should pick up (if you haven’t already) is her 2008 effort 'Wishful Drinking', a fantastic autobiography based on her one-woman stage show, which was filmed as a feature-length documentary in 2010 by HBO.

“You know what's funny about death? I mean other than absolutely nothing at all? You'd think we could remember finding out we weren't immortal. Sometimes I see children sobbing airports and I think, 'Aww. They've just been told.'”

Various versions of the encounter have been sung about “Stagger Lee” - including songs by Duke Ellington, Bob Dylan, James Brown and The Clash, with arguably the greatest one (and darkest) being Nick Cave and the Bad Seed’s take:

The Catholic Church Vs Santa kisses

1952: Jimmy Boyd sang ‘I Saw Mommy Kissing Santa Claus’ when he was 13-years-old. The festive number that tells the story of a child who witnesses his mum having an affair with Father Christmas became the US #1 song on this day in 1952.

Initially, the song was condemned by the Roman Catholic Church in Boston. Those overly sensitive scamps weren’t best pleased about the birth of Jesus Christ being associated with the shocking act of kissing. This led to radio station boycotts, and it was only when Columbia Records explained to the Archdiocese that the Santa in the song is actually the father in disguise that the ban was lifted.