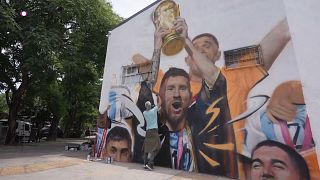 Artist Maximiliano Bagnasco has been putting the final touches to his artwork on a street corner in the capital's Palermo neighbourhood.

It shows an image that will be etched into Argentina's football history and millions more around the world.

Messi is in the center holding the trophy aloft while wearing the bisht, the black and gold tunic Qatari's leader placed over his shoulders as he prepared to pick up the Cup.

Behind Messi, raising his arms euphorically, is goalkeeper Emiliano 'Dibu' Martínez, the hero of the penalty shootout against France in the final.

At their sides are the tops of the heads of Paulo Dybala and Rodrigo de Paul.

Destined to draw... on a wall

Bagnasco told The Associated Press he knew he wanted to paint a mural even before the final took place.

"Days before the game, I had been talking about getting a wall, and I had been preparing the materials. I simply went to watch the game and waited for the image. I went out, celebrated a bit, and then went back to work on the image, and the next day I was preparing the whole equipment to win the cup with this mural" he said.

Dominique Rolley, a foreign tourist in Buenos Aires believes that the fresco is very well done.

"I am happy for Messi because Messi is going to retire. He is going to stop football and it's good for him to have the trophy," said Rolley.

Bagnasco is also the creator of a monumental mural of another of Argentina's great footballing heroes, Diego Maradona, in a building located on the outskirts of Buenos Aires.

It was inaugurated on October 30, when the 1986 World Cup champion would have turned 62.

Holy Sh*t: Messi as you've never seen him before

Wear it like Messi: football fans make the most of Qatari culture