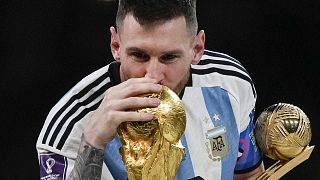 Messi, who captained the Argentina team to victory in Sunday's final in Qatar, has become the leading character of Argentina's World Cup narrative.

“WORLD CHAMPIONS!!!!!!!” Messi wrote in Spanish on his Instagram.

“I dreamed it so many times, I wanted it so much that I still haven't fallen, I can't believe it..."

“Thank you very much to my family, to all who support me and also to all who believed in us. We demonstrate once again that Argentines when we fight together and united we are capable of achieving what we set out to do. The merit belongs to this group, which is above individualities, it is the strength of all fighting for the same dream that was also the dream of all Argentines... We did it!!!

“GO ARGENTINA,” said the post which, at the time of writing, had 58+ million likes.

Messi's play in the final broke records by giving him the most appearances in the tournament at 26 games, displacing previous record holder, the German player Lothar Matthaus.

Many speculate that this World Cup may be the now 35-year-old's last, as the football legend stated on South American streaming service Star+ in October: "This will be my last World Cup — for sure. The decision has been made. I am counting down the days to the World Cup. There is a bit of anxiety and nerves at the same time."

But who knows what the taste of victory will bring...

What legacy will the 2022 World Cup leave for Qatar?

What role did the sound of music play at the Qatar World Cup?