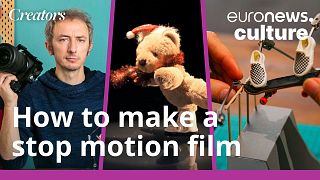 Victor Haegelin wanted to make his own animation films but he had a small problem… he couldn’t draw. He also didn’t know how to create 3D animation on a computer.

The solution he found was stop motion animation.

All you really need to get started is a bit of modelling clay or a Playmobil or Lego toy, he tells Euronews Culture. Then, armed with your camera and a light, you can start telling stories.

Victor Haegelin, now a very experienced animator and director, is better known by his Instagram handle Patagraph, where his incredibly skilled and amusing stop motion clips have garnered him an impressive 350,000 followers.

On his account Victor shares his films, his creative process, as well as behind-the-scenes tips and tricks.

What is stop motion?

Stop motion is a filmmaking technique that allows you to bring static objects to life using photography.

The object or character is photographed, then moved very slightly, before photographing again. The process is continued in this way, in increments. When all the images are put together it gives the impression of movement.

“You can animate anything that doesn't move by itself,” explains Victor. “So, most of the time, we animate figurines, articulated puppets or clay. You can animate objects, any object, a ball, a car, a bicycle.”

Victor has experimented with more and more complex techniques and materials over the years. His incredible portfolio of work includes animated food, leaves and even broken glass.

“I’ve also animated people, real people,” adds Victor. “You could think it's easy but when we explain the animation technique to the actor they say: ‘Yes it's all good. I’m an actor.’ But in fact, after fifteen minutes, he’ll cry because you have to hold the position for a very long time.”

How long does it take to make a stop motion film?

A lot of people enjoy the textured, endearing style that stop motion gives off but few know the true time and resources that go into making it.

“I think the biggest misconception for potential clients is that they feel like I'm playing and it's magical,” admits Victor. “'Can we get a film like that? I have €500'.”

In reality stop motion is a very time-consuming process.

“We take at least an hour to set up the shot, meaning to frame it, place the light… Then we need one hour of shooting for one second of film. That's at 12 frames per second,” says Victor.

“Sometimes we even shoot at 25 frames per second and then, it's not one hour, it's often two hours to two and a half hours per second of animation.”

That means Victor can shoot approximately 30 seconds of film in one week.

Of course, that does not include all the time that goes into the preparation for the shoot which includes writing the scenario, drawing a storyboard, creating the set and making the characters, nor does it include any of the post-production or editing.

Despite the rise in digital, why is stop motion still so captivating?

Even though we now have 3D digital animation techniques, many viewers are still drawn to the look and feel of stop motion animation.

“I feel like there's a palpable side to it that can't be matched in 3D even though they're making a lot of progress with textures and all that,” says Victor.

Maintaining the unique 'crafty' feel that’s so unique to stop motion is also one of the reasons Victor prefers to work in 12 frames per second, rather than 25.

When a viewer watches a clip at 12 frames per second their brain fill in the blanks. We perceive the continuity of the image but the video does not appear totally fluid.

Increasing to 25 frames per second increases this fluidity, but in doing so, can reduce some of stop motion’s signature style.

“I think most people associate stop motion with being charming,” says Victor. “But that’s something I'm fighting against, in a nice way. I think stop motion can also be… punk.”

Discover Victor Haegelin’s incredible work by clicking on the video above.

This artist draws stunning photorealism with an ordinary ballpoint pen