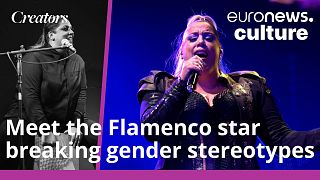 “I wake up singing and I go to bed singing. I'm sad and I sing, I'm happy and I sing… Without flamenco, without singing and without music... I think I would die."

Noelia comes from a traditional Roma family in Spain. Music, and in particular Flamenco, is closely intertwined with her community.

“I was born with Flamenco… We, the Roma, have consumed it since childhood,” she says. “It’s a way of life.”

Playing the cajón: a man's instrument?

Noelia is a percussionist and Flamenco singer. She is one of few performers who accompanies her own vocals by playing the cajón, the traditional Flamenco ‘box’ percussion instrument.

However, in the world of Flamenco, for a long time, there have been strict traditional gender roles for the different performers. Typically, women dance and sing and men play the instruments.

So when Noelia initially pursued her passion for the cajón, it surprised, and sometimes even shocked people.

“It breaks with traditional roles because it was supposed to be, like the guitar at the time, a man's instrument,” explains Noelia.

“My father didn't want to buy me a cajón, because he said it was a man's instrument… I used to ask for a cajón for my birthday, and they would bring me a doll or a bicycle. And I said: 'But why not the cajón?' and there was no cajón.”

Noelia explains that one of the reasons for the masculine tradition of the cajónis the way a person sits when playing. To play, a person typically sits with their legs wide open, playing the drum between their legs. A position that was deemed not suitable for women.

“That's why it was complicated. They made it complicated for you simply because society didn't accept it.”

Noelia faced discrimination from colleagues and during auditions.

"I've sat on a cajón and had an audition and they told me: 'The singer or dancer audition is later'… I’ve had to prove more because I’m a woman.”

However, she also had friends and peers who supported her.

“Thank God I have colleagues who have helped and there are many women percussionists today, thank God. And that this is moving forward... Unfortunately, we live in a world that’s a bit sexist. But well, the moulds are being broken.”

LGBTQ+ activism, breaking gender stereotypes and being a role model

Noelia has performed at many of Madrid's Pride events, and other LGBTQ+ events outside the city and has spoken publically in support of the community.

Her backing is particularly notable because LGBTQ+ people from the Roma community, an already marginalised group, face additional forms of oppression, as they may need to hide their identity from friends and family or risk discrimination.

"Having a stage, a microphone in my hand and a camera that is recording me, I think, it's very important to bang on the table and say that you're not hurting anyone for loving a person of the same sex... I mean, loving freely is the most beautiful thing you can do in your life."

Noelia's success in music and her notoriety in breaking down typical gender roles has also given visibility to alternative options for women, in particular Roma women.

Despite her outspokenness on these important issues, Noelia is not comfortable with being labelled a role model.

"What a responsibility! To be a role model, as you say, or to be an example... that word scares me... If I have made it easier for the next generations of women and Roma women, well, I'm delighted right?"

Discover Noelia's talent and passion by watching the video at the top of the page.