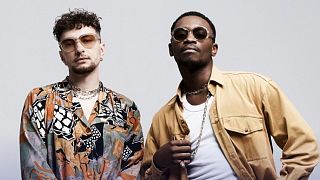 Ukraine will send TVORCHI to Liverpool to represent the nation at the 2023 Eurovision Song Contest.

Ukraine is the first country to selected its 2023 Eurovision entry, with more than 30 other nations still to pick an act in the weeks and months ahead.

Because of the ongoing war, Vidbir was held underground in a metro station this year, which has also served as a bomb shelter, keeping Kyiv residents safe from recent Russian bombardments.

The winning song was chosen by a combination of public voting and a jury, with the three members of the jury chosen by the public -- including Ukraine's 2006 winner Jamala.

"There were a lot of great musicians beyond these ten finalists, and I believe that they will have their say in Ukrainian music soon. This gives me hope and confidence that the 2024 Vidbir will be no less interesting!" said Pianoboy, Vidbir's musical director.

The English city of Liverpool will stage the 2023 Eurovision Song Contest, after Britain was asked to hold the event on behalf of designated host country Ukraine.

Ukraine won the right to host the glitzy pan-continental music competition when its entry, folk-rap ensemble Kalush Orchestra, won this year’s contest in May. Britain’s Sam Ryder was second.

Organizers concluded it was too risky to stage the event in Ukraine because of Russia's war, so the 2023 contest went to Britain, which says the event will be a celebration of Ukrainian culture and creativity.

The contest was founded in 1956 to help unite a continent scarred by World War II.

It has since grown to include more than 40 countries, including non-European nations such as Israel and Australia.

The organisers strive to keep music and politics apart, and overtly political symbols and lyrics are banned.

However, global tensions have often imposed themselves on the contest. Russia was kicked out of the 2022 competition because of its invasion of Ukraine.

Russian and Ukrainian soldiers fight within sight of each other

Eurovision 2023: Shock changes and no jury voting in semi-finals