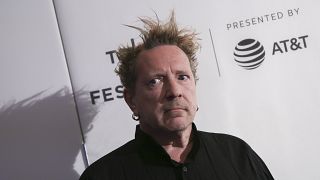 Rotten is among six acts for the Irish public to vote on sending to Eurovision   -   Copyright  Brent N. Clarke/Invision/AP
By Tim Gallagher  •  Updated: 09/01/2023

Public Image Ltd, who Rotten has been performing with since 1978, made the shortlist of six acts that could be Ireland's finalists.

The acts will be voted on by the public along with national and international selection panels.

The other acts, who will all perform on a special edition of the ‘Late Late Show’ in February are: ADGY, CONNOLLY, Wild Youth, Leila Jane and K Muni & ND.

“I am really impressed by the quality and standard of the six acts we have in our Eurosong final this year,” said Michael Kealy, RTÉ Eurovision Head of Delegation.

“The Eurovision Song Contest is a global phenomenon, and the competition is getting harder every year, but whichever of our six finalists gets to represent Ireland in Liverpool in May I've no doubt they will represent us brilliantly, winning new fans all over the world.”

Rotten - whose real name is John Lydon - will perform ‘Hawaii’, described as "a love letter to Lydon's wife of nearly five decades who is living with Alzheimer's." The song is "dedicated to everyone going through tough times on the journey of life," Lydon said. "It's also a message of hope that ultimately love conquers all."

All entries to Eurovision, which this year will be hosted in Liverpool, must be original songs. Eurovision 2023 will celebrate last year’s winners Ukraine, despite being hosted in the UK.

Ireland has won Eurovision seven times, more than any other country, but it has failed to qualify for the grand final since 2018. Sweden won the contest 6 times, while Luxembourg, France, the Netherlands and the UK won 5 times.