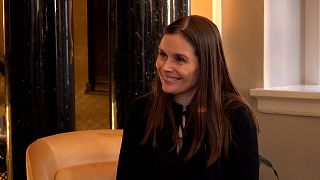 Euronews Culture was recently in Reykjavík for the European Film Awards, and while in the city, we sat down with Iceland's Prime Minister Katrín Jakobsdóttir, one of only eight women in power in Europe.

She made her mark on the global cultural map this year when she published her first thriller novel, entitled 'Reykjavík', which she co-wrote with best-selling author of the ‘Dark Iceland’ series Ragnar Jónasson.

Jakobsdóttir, former minister of education, science and culture, is the chairperson of the Left-Green movement and has been serving as the prime minister since 2017. She is Iceland's second female prime minister, after Jóhanna Sigurðardóttir.

During our sitdown with Katrín Jakobsdóttir, we talked about Iceland's place within the filmmaking industry, gender parity in politics and the arts, and how the world would be a better place if more politicians embraced their creative drives.

Euronews Culture: The European Film Awards take place in Iceland this year, a country which has become the Hollywood of Europe, considering it has accommodated countless big budget productions – from Star Wars to Game of Thrones. How significant is it for Reykjavík to host the awards?

Katrín Jakobsdóttir: We’re very happy that the event could take place in Iceland this year. The Icelandic public has really realized in the last 15 years or so how important the movie industry is. It is really the core of modern narrative that happens in the movies and in television. We have seen great Icelandic movies and television series coming into reality in the last few years. I think this is maybe symbolic for us to be hosting this very important prize, showing that we are really on the map of the movie world.

Looking at the nominees this year, there seems to be a parity between male and female nominees. Iceland has always been ahead of the curve when it comes to gender equality – from the first female president elected in 1980 and your party advocating for equal pay. You’re also a member of the Council of Women World Leaders since 2020. In your opinion, is enough being done to support and enhance the visibility of women in politics and culture?

We have done a lot here in Iceland. What we do is look at everything through the gender lens, if I may say so. Not just politics, but all sectors in society. And when we think about the movie sector, the art of filmmaking, obviously it is vital for us who watch the movies that they are told from different perspectives, that we have men and women and people with different backgrounds and origins telling us their stories.

The film industry used to be a very male dominated sector – it is changing and I am very glad for that, because it is so important for all of us to have different stories told with different perspectives to enhance our understanding that the world is a very diverse place. Films, just like literature and all other arts, are vital to really strengthen the understanding of different people.

I get frustrated here in my country. But when I go abroad and stand in international meetings, there are so few of us and so many men, still in the year 2022. It is quite shocking.

With regards to respect for other people, there have been many stories this year that show this engrained sexist double standard that refuses to die – I’m thinking of the Finnish Prime Minster Sanna Marin, for example, who was drug tested this year, and how male counterparts are not held up to the same scrutiny. Are you seeing any progress with regards to changing attitudes?

There is progress, but I sometimes get very frustrated here in Iceland. We still haven’t reached our goal of equal pay. Even though we have a legislation and we’re working on it, we’re still not there. We still have gender-based violence here in Iceland, and it’s a top priority for my government to fight this through amendments to the legislation.

So, I get frustrated here in my country. But when I go abroad and stand in international meetings, there are so few of us and so many men, still in the year 2022. It is quite shocking. And what we are seeing around the world is a backlash when it comes to women’s rights, when it comes to sexual and reproductive rights. I think for all of us who want to see a more equal world and a better world, this is a core issue - to fight for women’s rights around the world and stop that backlash.

One change that is being implemented, especially in awards ceremonies, is gender neutral categories. Is this a good idea in your opinion, or could these paradoxically limit female visibility with fewer prizes being awarded?

I think diversity is the key word here. We don’t only have men and women – we also have different sorts of people and we have a relatively new legislation in Iceland regarding gender autonomy, which says that it is the right of the individual to choose one’s own gender. I think that more diversity isn’t a bad thing for men and women. I think we simply have to embrace the fact that the world is full of very different people.

One award that the European Film Awards hand out is the Sustainability Award, which this year goes to the European Green Deal. Iceland has long focused on the protection of the environment and sustainable tourism. Do you think enough is being done, both in Iceland and on an international level, or is the issue still being paid lip-service?

We are not doing enough. I don’t think anybody is doing enough. We have a crisis, not just when it comes to climate but also when it comes to biodiversity. More and more people are realizing that these two things are closely entwined. Of course, we are trying to do our best with ambitious goals – we’re heading for carbon neutrality no later than 2040, we’re heading for an energy shift to green energy in our transport system… But it’s a big challenge, and yes, we are making progress, but I would prefer that it was even faster.

I must admit that I really enjoyed writing (my book), and I think that even us politicians can be creative. I think it’s very good for us, because sometimes we are not very creative in our politics!

I’d be remiss not to mention the fact that you published a novel this year, a crime novel. It’s not the first time that this has happened in Iceland, as one of your predecessors, Davíð Oddsson, published a novel when he was in office. What is it about writing and the crime / noir genre that appeals to you?

I used to study crime fiction. I studied Icelandic literature and crime fiction was my main topic, so I have always enjoyed crime. In fiction, not in reality! And I actually was writing my master’s thesis when the Icelandic crime novel was flourishing and becoming rather big. It has become even bigger in the last decade or so. And it has been a longstanding dream to write a novel of my own, but I definitely would not have done it if I didn’t have this co-author (Ragnar Jónasson), who pushed me and said: “We have to do this together!”

I must admit that I really enjoyed writing it, and I think that even us politicians can be creative. I think it’s very good for us, because sometimes we are not very creative in our politics! And it’s because the writing time was during the time of the pandemic, when I was totally absorbed in the virus and was getting, let’s say, obsessed with the virus and its effects and what we were doing.

So having this kind of pet project to think about sometimes late in the evening or when I had an hour or two actually saved my mental health during the pandemic.

The more I thought about you writing your novel, the more I thought: Wouldn’t the world be a better place if world leaders took the time to embrace a creative outlet? So, tap dancing for Biden, or oil painting for Macron… Terrible ideas, granted, but as you say, it’s very good for politicians to get creative…

Finally, this year has been challenging on several levels, which I don’t have the time to list. But have there been any events this year – culturally or otherwise – something you’ve read, seen or heard that have acted as a balm in difficult times, or even given you hope?

I must say that my friends make jokes about me because I don’t have many hobbies! But my hobbies really are all about that – reading a good book, going to a concert, going to the cinema… I must say that I really enjoy going to the cinema because I think that in modern times, we always have our phones – you’re looking at the television, or wherever you are, and you’re always checking if you have a message. When you go to the cinema, you can’t do that, so you’re kind of stuck. So it really has made the cinema a more exclusive experience than ever before.

Check out the video above for extracts of the interview with Katrín Jakobsdóttir.

Here are the 5 films nominated for the LUX Audience Award