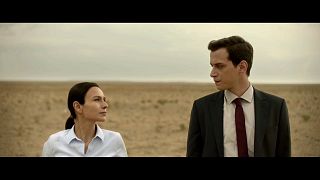 One of the films shortlisted for the Lux Audience Awards   -   Copyright  Memento Distribution
By Euronews  •  Updated: 16/12/2022

The Lux Audience Award is a prize given to the best European film by a vote from the public and members of the European Parliament.

The announcement of the 5 nominees was made in Reykjavík on Saturday, 10 December, during the European Film Awards.

The European Film Academy, made up of more than 4,000 professionals, chose 5 films showing the great variety of European cinema.

Unsurprisingly, three of the five films shortlisted have already experienced major success at other festivals. Triangle of Sadness won the Palme d'Or and best European film of the year, while Alcarràs by Carla Simón won the Golden Bear in Berlin, and Close by the Belgian Lukas Dhont took the Grand Prix du Jury in Cannes.

Euronews met with Mike Downey, Chairman of the Academy's Board of Directors.

According to Downey, there are "an extraordinary number of very talented filmmakers who are making a huge contribution in all areas, not just in entertainment, but with the element of social justice, human rights, (not to mention) the crucial nature of film in understanding who we are, where society is, what changes need to be made, and reflecting those changes."

Among the nominated films is the thriller Burning Days from Turkey and a comedy from Portugal, Will-o'-the-wisp.

The public can vote for their favourite film until 12 June 2023, on the LUX Awards website.

Here are the winners of the 2022 European Film Awards