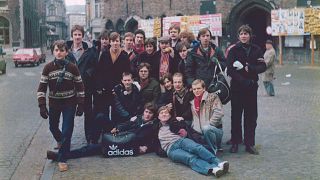 Liverpool fans in Brussels for their team’s game against Anderlecht in the European Super Cup, December 1978.   -   Copyright  Stephen Monaghan
By Jonny Walfisz  •  Updated: 09/12/2022

“Before 1977, no one wore trainer shoes to walk the streets. No one wore a tracksuit jacket or shorts.”

The late 70s. Flared jeans, acrylic shades and massive collars were on the way out. Punk was bringing the narrow jeans and leather boots into fashion. But on the streets of Liverpool, football fans were developing a different sense of style.

A quick google of ‘sportswear’ or ‘athleisure’ will bring up countless articles telling you that sports clothes have become some of the most popular brands since the pandemic.

Trainers, or sneakers, have been popular for decades now. But you might not know that for many, the origin of the trend comes from football fans in the north of England.

“It became a bit of a fashion catwalk,” Dave Hewitson recalls. “You’d go there and there’d be a different pair of jeans out, then a week later a new pair of Stan Smith trainers, the week after a new Fiorucci jacket and you’d worry you’re out of date.”

Fred Perry and Slazenger were the new brands to be seen in, and Liverpool’s terrace culture was born. Later, London papers would come to name the changing fashion sense as ‘casuals’ but in Liverpool, it was just fashion.

Dave Hewitson is an expert on terrace culture. He’s written the book on it, literally. He’s penned ‘The Liverpool Boys are in Town’ and ‘80s Casuals’, runs a record label and the clothes brand 80s Casuals dedicated to the culture.

Now, Hewitson has partnered with National Museums Liverpool to exhibit terrace culture in all its glory at the Walker Art Gallery.

Fusing artworks inspired by terrace culture with displays of the clothes, trainers and ephemera of the era, the ‘Art of the Terraces’ exhibition paints a picture of how Liverpool’s football fans defined a culture from the 70s through to the 90s.

The fashion spread across the country, Hewitson explains, when fans of other teams would come to Anfield for away games and see the way others dressed. How you dressed had never been so important to football fans.

“At that time, there were only five or six sports shops in the whole of Liverpool,” Hewitson says. Now there are sport shops on every block, but back then it meant that if you wanted the latest gear, you had to travel to find it.

Fans would travel for away games to Germany just to get a chance at buying the trainers that were only available there.

“Liverpool played Bayern Munich in April 1981 and about 3-4,000 Liverpool fans went over,” Hewitson recalls. “Half were between 16-22 years old and were going to buy trainees specifically.”

People were going on holiday to Belgium, to Italy and Spain to get the latest shoes from FILA and Adidas. It was so popular, some Liverpudlians became entrepreneurs setting up trips to buy shoes and clothes on other fans’ behalf.

The power of casual culture was so great, that the haute couture labels like Prada and Hugo Boss pivoted to sportswear instead of just the suits and shoes their men’s ranges had once been.

In the Walker Art Gallery, the fashion shift is documented through artworks from a range of incredible artists. Leo Fitzmaurice, Turner Prize winners Mark Leckey and Mark Wallinger, Pete McKee, Lucy McKenzie, Ross Muir and Dave White all have works on show.

Mark Leckey’s video essay ‘Fiorucci Made Me Hardcore’ in 1999 shows ‘casuals’ on the walkabout in London. Leckey was an Everton fan and grew up nearby in Ellesmere Port, just south of Liverpool. For Hewitson, it’s the perfect example of how casuals have been influential at all levels of culture.

At the heart of the exhibition is a recreation of a teenage Liverpool FC fans’ bedroom from the 80s. It’s got era-defining wallpaper, a matching duvet, posters of bands and a little 80s TV playing a piece of art. On the floor is a Subbuteo set, a board game version of a football match.

Recently, Hewitson’s wife found a man crying outside the exhibition in the smoking area.

“He said he was so emotional, he’s just been around an exhibition and it took him back to his childhood,” Hewitson says. “I expected it to have an effect on people, but not to make them cry, you know?”

“What we've put in there is very relevant to everyone who sort of has been going in the game since the 70s, the 80s, the 90s or wherever,” Hewitson says.

‘Art of the Terraces’ is at the Walker Art Gallery at the National Museums Liverpool from until 12 March 2023.